Three Views on Digital Conversion in the Functional/Industrial Sector

While still a small segment, it is growing rapidly with the potential for incredible opportunity

For business owners and production managers from across the printing spectrum, new technologies can serve as idea factories. Whether the core areas addressed by companies in the functional/industrial segment are in printed electronics, manufacturing, décor, or medical, the promise of new printing platforms, new inks, or other systems and technologies can be mind-boggling. But moving from the idea factory to a real-life production environment requires consideration and strategy.

While the functional/industrial segment is small in numbers, it is massive in scale. Further, it is a hotbed of innovation typified by exacting standards and unique performance requirements. Professionals working in this space — whether their companies are small and highly specialized, or 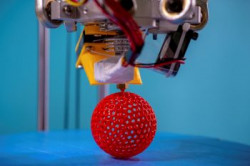 massive manufacturers where printing is but a single step in a broad manufacturing process — all retain unique knowledge of what it takes to get the job done.

According to Vince Cahill, president of VCE Solutions, a consultancy focused on digital applications for the functional/industrial sector, the effect of digital printing in general, and inkjet in particular, is redefining production models in vertical markets, including automotive and apparel manufacture. Much of this effect, he says, comes from ongoing developments in both software and inks. In some cases, digital printing is redefining products and production; in others, products and production are redefining digital printing. It is neither “chicken” nor “egg,” but both.

A great deal of pride and expertise can be found among the industry’s functional/industrial printers. These include unique applications onto exotic substrates, the need for extremely high performance and detail, and even the need for the ink to create a reliable electrical circuit. It is rooted much more in science than it is in craft. As product development in inks, equipment, curing, and other areas moves forward, opportunities are created to improve upon, or even replace, tried-and-true technologies.

Cahill says that while improvements have increased the durability and performance of certain inkjet inks, it is the end product that influences the decision between analog, hybrid, and digital technologies. As an example, if a metal nameplate on an automotive engine block features only a part number and all plates are the same, then a traditional printing approach holds a strong cost advantage, given high volumes and sameness. If, however, each plate requires a unique, printed bar code, for instance, a digital process may be the only viable approach, given that the printing on each piece is unique.

Ink and Its Effects

Laura Maybaum has worked in and around the functional/industrial segment for decades. As market segment manager — screen ink for Nazdar, a manufacturer of inks for the graphics arts industries, she has witnessed ongoing developments in the space.

Regarding industrial-focused inks, Maybaum says she is witnessing a need for expanding the “windows of performance” for them. This will serve to increase production flexibility. “[Printers] want processing and performance of the ink to be as wide as possible. This allows companies to get outside of rigidly limited production and explore other viable options.”

In a printing industry where, like the world at large, the only constant is change, Maybaum sees the benefits product development can provide. “When digital came along, there was hesitancy before there was adoption. On the graphics side of the business, I saw anxiety lead to adoption, then adoption to acceptance. This is now happening in the industrial market.” She says as industrial printers are able to move away from rigid production approaches, they are better able to see other approaches that are more viable and commercially available. “That,” she says, “allows for entry of other processes like inkjet.”

As digital printing — generally inkjet — continues to make inroads into the industrial printing segment, technology users face the decision to adopt what’s new or stay put. The transformation to digital is a mixed bag in the industrial space, based on the inherent needs of the end product. Ceramic tile, a famous example of rapid digital transformation, was a much easier challenge to address than, say, printed electronics. But change is coming to virtually all parts of the segment, eventually. Cahill highlights apparel manufacturing – particularly short-run garment printing – as an area where inkjet printing is seeing increasing levels of adoption. And while the per-garment price is higher, it is more specialized production, thus justifying the increased production costs. Further, he sees this model as a way more garment production might be on-shored — produced domestically instead of being made elsewhere and then imported.

Looking into the future of the functional/industrial segment, there is much development underway and much opportunity to come. Cahill sees increased use of inkjet technology in the jetting of graphene, which will be used extensively for sensors to be embedded into clothing and other textiles. Silver inks and aluminum will also come into play, as will the manufacturing capabilities of 3D printing, which will see increasing use moving forward. Further, he is looking ahead toward the development of improved pigment-based inks, a needed development for more robust, durable decorative printing.

As a company with a long history in the printing industry, and an early commitment to developing digital systems for the industrial sector, Agfa, says Mike Horsten, global business manager for the company’s InterioJet line, has found success in listening to the needs of specific industrial segments. He says just as the sign and graphics segment has been successful for Agfa, so also will industrial-focused printing. Using systems the company developed for leather printing and flooring applications as examples, he says, “We’ve developed production for industrial, and will continue to do so.”

While every new segment needs to be examined, says Horsten, the trajectory is often the same: Manufacturers want digital printing technologies, but not full disruption to what they have traditionally done. To address this, Agfa has worked to, for instance, provide the same color capabilities gravure-focused flooring producers are used to – in a system that fits seamlessly into their existing manufacturing processes. Does the company see digital as a full replacement to gravure? Horsten says no, but adds that the break-over point of digital, as compared to analog printing, has grown significantly, and that “smaller runs are the direction.”

In developing digital systems for the industrial segment, Horsten says Agfa has, at times, had to follow difficult development curves, but has found success by meeting the needs of functional/industrial printers. He says that as Agfa moves into new industrial segments, a significant ingredient to success is in helping technology users understand how to best use digital printing systems. He notes they need, “service, support, and training to help them manage the change. It is the innovative way.”

Asked about the potential of the industrial market for digital printing, Horsten says — based on 30 years of experience in that space, and the transformative effect digital printing has had on the sign and graphics segment — he sees a bright future. He believes inkjet “was truly meant for production,” noting it produces less waste and is ecologically favorable. Horsten says that while a single inkjet system can’t compete on speed with, for instance, a gravure press, a fleet of them can. He adds that a fleet can be used for mass-production, but also for many small jobs – a differentiating factor. Finally, Horsten says digital can provide “full color replacement” over traditional technologies.

As companies consider new technologies, whatever form they may take, it is important that they approach them with an open mind and a tiered approach to evaluation. First, evaluate the “what.” What does the system do and what can it do to help the company do what it does better, faster, more efficiently, differently, or at a lower cost? What options or upgrades does it offer that the company’s current technology does not? And finally: What are the implications of waiting?

The evaluation, however, shouldn’t stop there. It should continue into the consideration of possibilities, particularly the “where.” Where, for instance, would the adoption of a new technology place a company, as a manufacturer, in relation to its competitors? And, particularly, where will the technology take the business as it presents different modes, reduced minimums, and even zero-inventory and just-in-time approaches?

There are no easy answers in this industry, partially because functional/industrial printers are producers of myriad things, and joined only by the processes and technologies they utilize. The answers, then, require asking the good questions, doing essential research, and making the best possible decisions.

How Did COVID-19 Impact Catalogs?
END_OF_DOCUMENT_TOKEN_TO_BE_REPLACED