The Multifunctionality of Computerized Cutting Systems 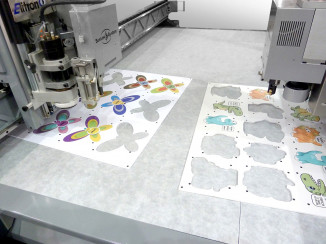 For the sake of this article, the definition of a “cutting system” will be rather widely defined. The reason for this is two-fold. The first is to provide a broad view of commercially available choices to give wide-format graphics producers the broadest array of considerations. The second is to expand the limited, but commonly understood, view that cutting systems are simply tools to cut to size, cut to shape, or subtract what is not wanted as a part of the finished piece. It is important to consider the computerized cutting system as more than a process tool for wide-format graphics production, but as a tool for differentiation and value-add, and also, in some cases, as a unique imaging tool.

Since the inception of wide-format inkjet printing, much of the focus has been on the speeds and capabilities of the printing device. However, a view of the broader process — including materials selection and finishing options — helps shops understand the possibilities of the tools at their disposal, and their ability to convert a print into a product.

There are many benefits with digital cutting systems. They can offer precision, repeatability of work, improved speed over analog or manual choices, and the higher quality and lower spoilage that result from the use of an efficient system. Further, these systems can offer time savings, production flexibility, and new customer acquisition. 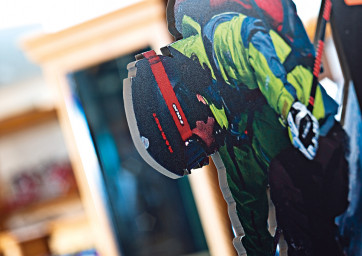 While the terms “cutter” and “router” are often used as though they are interchangeable, the differences are very real and essential to understand. In basic terms, Drury states that cutters use a blade, and routers use a rotating bit. Within that initial, binary choice is a wide array of blades and bits designed for specific purposes and applications. Just as graphics producers who deeply understand the uses and capabilities of substrate materials gain an advantage over their less-savvy competitors, companies that have mastered ways to truly maximize the capabilities and uses of cutting systems operate at an advantage.

The other major system type outside of cutter and router systems is laser cutting. According to Hawkins, the main advantage of laser cutting is speed, as well as the diversity of substrates the laser can cut. He adds that one of the major benefits of laser technology is that it can also be used to image substrates via laser etching, which gets a great amount of use in market areas including signage, education, and death-care (funerals, etc.).

Among the basic, but highly important, capability-focused “rules of thumb” between cutting and routing systems is the fact that routing systems utilize a spinning bit to cut, and are not capable of sharp corners. Also, while many of the cutting systems that utilize blades are capable of cutting fabrics, routers are not. Finally, while lasers can cut a multitude of materials, it should not be used to cut PVC-based products like Sintra and gatorboard, because doing so can release a poison gas.

These considerations, among many others, must be factored into any company’s cutting technology decision. Businesses must know what they want the system to do, and ask the key, process-specific questions they need answered before they sign a purchase contract. While it can be easy — and ill-advised — to view these three cutting platforms as “more or less the same,” they should instead be viewed as a Venn diagram with all areas overlapping somewhat. 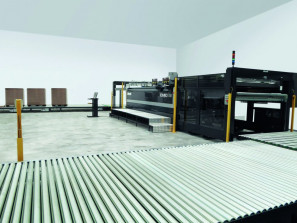 Recent developments in cutting systems make these critical decisions less fraught. As compelling examples, some of Elitron’s systems offer cutting and routing systems, while some of the Zünd systems offer all three capabilities through a modular approach. It all really comes down to money: Increased capability and flexibility comes at increased costs, and whether a multifunction or modular system is the right investment is a business’s decision to make, based on its specific needs and budget. While easy decisions are nice to have, this is not one of them. The breadth of diversity of application areas and markets served makes easy answers hard. Do the research.

In the last decade or so, computerized cutting systems have become “must-have” finishing technologies, particularly for producers using flatbed inkjet systems to image directly onto rigid substrates. Before these systems came to the fore, most cutting was done manually (literally hand cutting), using a guillotine cutter (which is great, as long as the operator is doing straight cuts), or die-cutting (which can handle contour shapes, but also requires the time-consuming manufacture of a die, as well as its storage, maintenance, and management). Because of the limitations of these approaches, most rigid signs, for instance, tended to be four-sided, featuring right angles. To deviate from this norm meant slowing the process. This, simply put, was an analog, mass-manufacturing approach. Anything contour — anything out of the norm — needed to be produced in large enough quantities to make the extra effort cost-effective.

Those with a working knowledge of the rise of digital printing will recognize the phenomenon described above — the “digitization” of a process. Just as the capabilities of digital printing technologies made short-runs, versioning, and a profusion of new opportunities cost-effective and possible in the printing department, computer-aided cutting devices allowed companies to embrace these same concepts on the finishing side. With the adoption of digital cutting systems, the full promise of digital printing — where printing and finishing were combined — became possible. 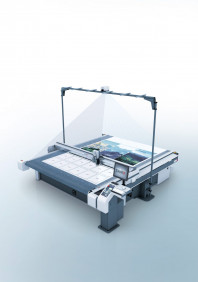 This setup features an overhead camera system that captures all registration marks in a single image, thus speeding the process. | Credit: Zünd

Regarding productivity, the speed of cutting systems is highly dependent on the shapes to be cut. Valade gives the example of a circle, which can be cut rapidly, versus a 27-point star, which will take significantly more time.

In response to the ongoing quest for graphics producers to minimize touches and maximize throughput, cutting system developers are increasingly adding integration with production software packages, including RIPs and MIS. According to Bell, the goal is to add automation to the process whenever possible, thus decreasing time to market. Drury adds that Zünd’s goal is to make the software driving the cutting system as open as possible, allowing for easier integration across software platforms. This, she says, has led to improvements among users in both productivity and quality.

Automation, however, is not solely a software-focused strategy. Both Zünd and Elitron offer mechanical automation, including systems to load and unload stock, and to visually align the print for cutting. Just as automation systems have minimized the inefficiency of manual handling and maximized the throughput of high-production inkjet systems, so have the manufacturers of cutting systems.

Regarding developments in laser systems, AP Lazer’s Hawkins shared that the use of cameras on systems using CO2 lasers has allowed for faster alignment of the material to be cut or imaged.

Through innovations in software and mechanical automation, finishing using computer-aided cutting systems has become part of the high-production process. When compared to non-automated approaches, which have been traditionally seen as production bottlenecks, this creates a more compelling argument for companies considering a high-production, high-capability cutting solution.

Valade says Roland DGA’s bestselling print devices also feature integrated cutting. He says that the additional cost is nominal when compared to the purchase of separate printing and cutting units. Among other features, Valade says some of the company’s systems include integrated take-up capabilities, which allow graphics producers to run long jobs unattended — such as a long run of decals — with the result being a full roll of product that is printed, contour cut, and ready to use. 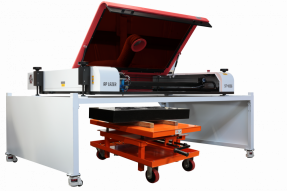 This system is being used to image directly onto a gravestone — an example of how some cutting systems can also be imaging systems. | Credit: AP Lazer.

The company, Valade adds, is also seeing continued use of its integrated printing/cutting devices for a variety of end products, including B2C decals for snowmobiles and ATVs, packaging prototypes, and heat transfers for customized apparel. Some integrated cutting systems are also being used to provide access to the short-run package printing market.
Cutting systems from companies such as PackSize and CVP Impack are specifically designed to measure and cut corrugated stock that perfectly fits materials to be shipped out of printing facilities and other manufacturing operations.

Not only do these systems reduce the cost of packaging for shipping or delivery, but they reduce spoilage from delicate, printed items being knocked around while in transit. This on-demand model also eliminates the need for inventory of different sized shipping boxes — saving time in inventory management, and saving storage space.

While technology applications open opportunities, new capabilities, or ways to produce or transform materials, success comes when the customer embraces the benefits these technologies can bring. In digital printing, for instance, full realization of the technology came when designers and budget-focused customers learned to “think in color.” Similarly, the promise of cutting systems for innovative graphics applications will require these same people to “think in shapes.”

Like most of the tools used within the broader wide-format graphics process, one can view computerized cutting systems as utilitarian machines (among other utilitarian machines) that perform a task. While that is certainly true, it is also shortsighted, because those companies that have been able to utilize these systems (and others) to automate, innovate, and differentiate their businesses have grasped the full possibility of what they have to offer.

For companies looking for their first — or next — computerized cutting system, the experts weigh in on the essential considerations.

Bell suggests companies look beyond simply the speed of the machine and also consider its performance — what it can do, and what it can’t. She also recommends careful consideration of total cost of ownership, as blades and bits do need to be replaced periodically, along with the level of service available for the machine. Additionally, she urges companies to consider new opportunities that can be realized from the implementation of any new system, given that it will change the nature of production.

Echoing Bell’s suggestion to look beyond speed, Drury recommends companies focus on their entire workflow, and consider how a new cutting system will integrate with its existing processes. This includes integration with workflow and job management software, print-to-cut matching, and job-tracking capabilities.

Hawkins urges companies to understand that any new system — laser-cutting systems included — comes with a learning curve, and realizing a novel idea with a new, unfamiliar technology can be frustrating. He recommends companies understand — and learn to calculate — the return on their investment. Like Bell, he says companies need to consider how a new technology can change both processes and opportunities.

One key consideration offered by Valade is to understand the primary application areas a cutting system will be expected to handle. Cutters are no different than many of the machines used in graphics production in that, among the many choices available, it must be able to favorably answer the question, “Will this print/cut/make what I need it to?”

The reality is that today’s wide-format segment is truly awash with choices of computerized cutting systems, offering expanded capabilities and the opportunity to increase quality, speed production, and differentiate one’s imaging business. The challenge is to make the right choice, ensuring the decision made is one that enables growth and opportunity. n

This article originally appeared in the PRINTING United Journal.

Tips for Getting the Most Out of Your Cutter

How Did COVID-19 Impact Catalogs?
END_OF_DOCUMENT_TOKEN_TO_BE_REPLACED