The Graphics of Super Bowl LIV

Super Bowl LIV, held earlier this month at Raymond James Stadium in Miami, Fla., ended with the Kansas City Chiefs taking the top honors. But before the first kickoff, another MVP was already hard at work: bluemedia.

bluemedia is an official partner with the NFL, and was responsible for the vast majority of the graphics printed for the big game. For the past six year, the shop has handled the printing and installation for not just the stadium graphics, but also those found at the three official NFL hotels, the airports, the practice facilities, the NFL Experience media center, and the Opening Night venues. Overall, says Hayes Holzhauer, EVP of operations for bluemedia, about 95% of all the graphical elements for the Super Bowl were created by his company.

“We handle all the primary graphics,” says Holzhauer. “The largest in square footage is what we call perimeter fencing, or security fencing. Between the primary NFL contract and several other clients that own certain parts of the secure perimeter of the stadium, we put up a double-wall around the entire venue. This year it was over eight miles of fencing.”

And that is just one example of the projects the shop tackles for the Super Bowl project. In total, the shop has 13 presses, several of which are Durst machines used to print all of the fabric pieces, including that massive fencing job.

Holzhauer notes that planning for a job of this scale and scope starts long before the season even begins — planning for Super Bowl 2021, in fact, will begin next month. “For Super Bowl 55, the meetings will start in March, then go every month,” he notes. “The last one is in November. March through November is all surveys and production meetings,” with everyone from the NFL, to stadium operations, to homeland security involved in the planning process to ensure when the day finally arrives, it all goes smoothly.

Big Challenges for a Big Game 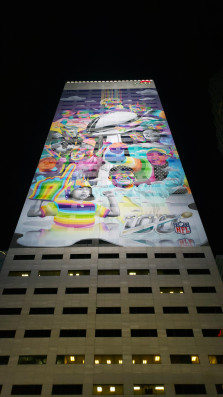 Two weeks before the game, the security begins to increase, and Holzhauer notes at that point it becomes difficult to get the larger graphical elements in and installed. When possible, he says that he tries to have as much delivered to the site ahead of that deadline as possible, especially the pieces that aren’t team-specific. “We try to have as much as possible done ahead of time, but more and more they want the team-specific stuff on there, which we can’t print until the playoffs.”

The second challenge after coordinating with security, is ensuring graphics go up in conjunction with the other contractors on site handling their own equipment. “Every year, for example,” says Holzhauer, “we have to put up certain signs before the tents or TV signs are built because we won’t have access once those are in place.” Elements such as that are part of why there are so many logistics meetings a year ahead of time, to ensure every person on the ground knows the schedule, and knows when and where they are supposed to be.

The biggest challenge, however, is the timelines, which are continuing to decrease every year as more and more the NFL is looking to have the specific teams that will be playing on the major graphical elements. “That becomes more challenging for us,” says Holzhauer, “because we have to wait until the two championship games are over. That Sunday, we have a full staff waiting — they show up an hour before the first game ends, and as soon as it’s over, we’re printing that team before the second game starts.”

Generally, there are just two weeks left once the final teams are known, with Holzhauer noting at that point, “every second counts.” The design team already has all the graphical elements created and approved for all four of the final teams, and every piece is sorted by the priority of when and where it needs to be installed so the most time-critical graphics can be pushed through first. “This year we had several hundred graphics that were team specific,” says Holzhauer.

As the graphics are completed, bluemedia can’t even rely on the normal shipping methods, Holzhauer notes, since even “Fedex is too slow.” Instead, the company knows the flight schedules between their location in Arizona and wherever the game is being held, packing the graphics into cargo bags and hand-delivering them to the airport to put them on outbound flights, with people on the ground to collect them as soon as they land in the host city to bring to the site for installers. Holzhauer notes that depending on the flight schedules, some of the graphics are printed, shipped, and being installed in just six hours.

bluemedia has actually been working with the NFL for 10 years, doing smaller jobs for several years before winning the larger contract. Today, there is a dedicated Super Bowl team on staff, who attend every production meeting and ensure the print shop remains on schedule. Once installation begins, Holzhauer notes that it increases to about 30 people on location, most of whom are internal staff, supplemented with a few local installers or temporary labor to fill in any gaps.

“It’s getting better every year,” Holzhauer says. “Six years ago, we were learning the tight schedule, and learning how all the relationships work, and for us it’s getting better at doing [the work] more efficiently. And people love to see their work on television and online — there is satisfaction seeing your work done well for everyone to see.”

It’s a massive project that takes a team of dedicated people, along with high-end print technologies, state-of-the-art software, and a willingness to go the extra mile to get the job done not just on time, but flawlessly. Chiefs quarterback Patrick Mahomes might be the official MVP of Super Bowl LIV, but bluemedia is the behind-the-scenes MVP, ensuring the game looked perfect both on and off the field.

A Slice of Super Bowl LIV

While bluemedia handled the bulk of the graphics for the big game, there were some projects tied to Super Bowl LIV that weren’t part of the official package — such as the campaign that Pizza Hut ran in Miami leading up to the event.

According to a Pizza Hut spokesman, the goal of the company’s print campaign was, “to make sure that Pizza Hut’s presence was felt in Miami during Super Bowl weekend. For those lucky enough to be in Miami, we hit the hot spots and handed out more than 30,000 slices of piping-hot free pizza to fuel fans all weekend long.”

To make it happen, and to ensure the branding was on point, the team relied mostly on street-level graphics, including a Ford F-250 vehicle wrap that was produced and installed by local vendors in Hollywood, Fla. “The vendor we worked with for this project had a proven track record working with reputable organizations such as the Miami Dolphins and the Miami Heat, as well as influencers from the Miami area. It was our first time working with them, and we were pleased with the job they did to help us activate on-site in Miami,” notes a Pizza Hut spokesperson.

Covering more than 40 miles around the stadium with the wrapped vehicles, the brand ended up handing out 35,104 slices — or 4,388 pizzas — throughout the weekend leading up to the Super Bowl. In addition, the brand handed out a wide variety of swag items, ensuring that even after the pizza was consumed, consumers continued to talk about the campaign and the company.

Overall, Pizza Hut was very pleased with the results of the campaign, notes a spokesman. While a few challenges did pop up, the brand and vendor quickly handled it, and ensured the overall impression left behind was positive. “There can always be hurdles when producing a campaign, but as a brand we are committed to giving fans unforgettable experiences through their love of football and pizza, and our on-site campaign in Miami did just that.”

How Did COVID-19 Impact Catalogs?
END_OF_DOCUMENT_TOKEN_TO_BE_REPLACED