Nonprofits want to send a big message, but don’t always have a huge advertising budget. While billboard prices can be impacted by a number of variables, generally speaking, they are affordable on any marketing budget. They’re cheaper than television, magazine, and newspaper advertising. Outdoor ads deliver the most value — in terms of cost-per-thousand impressions — of any type of advertising, even digital.

Running a successful digital campaign demands a comprehensive understanding of SEO, SEM, and marketing strategy — or hiring someone that does. None of that is required when running a billboard campaign. You submit the design and you’re done.

The design can be as simple or as complicated as you want. Anyone with basic graphic design skills has the ability to design a billboard. If you don’t know a graphic designer, most vendors offer design services for a nominal fee. No advanced tech knowledge is required to put up a billboard.

In the past, broadcast media — TV and radio — were the go-to formats for issue-based ads. It was a fantastic way to reach people back when families sat around the TV or radio every night. Obviously, this isn’t the case anymore. Not everyone is watching the same thing on TV, or listening to the same thing on the radio. Even if they were, they’re likely streaming or watching a recorded version, giving them the opportunity to skip or fast-forward the commercials. The fragmentation of broadcast media makes it a less desirable medium for issue-based ads because it’s harder to reach everyone at once.

Everything Counts in Large Amounts 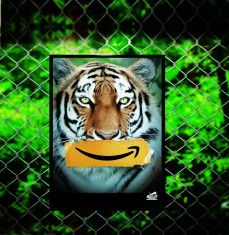 Big Cat Rescue, a 501(c)(3) nonprofit organization, is one of the world’s largest accredited sanctuaries for exotic cats, and is a leading advocate for ending the abuse of captive big cats and saving wild cats from extinction. This campaign for Big Cat Rescue and Amazon Smile was created by PPK, a full-service advertising agency and production company based in Tampa, Fla., and won a bronze OBIE award from the OAAA in the Nonprofits & Public Service category in 2019.

Billboards make a massive impact on people. They’re huge, they’re hard to miss, and if you’re clever about your design, they’re extremely memorable. This is why big brands and retailers still use them today. As impactful as they are, they’re even more so when used for issue-based advocacy.

When an established retailer buys a billboard, it’s only considered successful if someone who sees the billboard eventually makes a purchase from that retailer. Campaigns based around causes and issues work a little bit differently. When the goal of a campaign is to promote a cause or to raise awareness of an issue, it’s successful every time someone looks at that billboard. Every single glance has value, and billboards get a lot of glances.

When you’re not trying to sell anything, it also frees your campaign from more traditional advertising rules. This means nonprofits and issue organizations are also more capable of taking advantage of a medium that is essentially a giant piece of art. The recent National Geographic campaign for endangered species is a good example of this concept in action.

To put it simply, more nonprofit organizations are turning to billboards for issue advocacy because they’re currently the best format for them. Anyone can afford and design a billboard, everyone sees them, and they are hugely impactful when used to raise awareness. What more could a nonprofit organization ask for from an ad format?

Be Prepared for A Tax on Printed Goods

The Evolution of the Circular Economy
Comments
COVID-19 Resource Channel