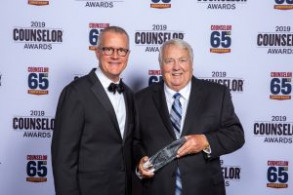 Tim Andrews, ASI president and CEO, left, presents Ted Stahl, Executive Chairman of the Board and Founder, Stahls’, GroupeSTAHL, Sterling Heights, Mich., with an award for being named the Supplier Family Business of the Year by the Advertising Specialty Institute (ASI), Trevose, Pa.

STAHLS’ – the world’s largest manufacturer of garment decoration materials and equipment – was recognized as the Supplier Family Business of the Year by the Advertising Specialty Institute (ASI).

This award is part of ASI’s Counselor Awards, which includes nine other recognitions, given to top distributors and suppliers in the promotional products industry at its annual show in Chicago. Awardees are nominated by industry peers and chosen by editors from ASI’s Counselor magazine.

Ted Stahl is the third-generation owner of Stahls’ and sons Brett and Dan and daughter Erin are part of fourth-generation family leadership.

According to Stahl, “In 1932 my grandfather A.C. Stahl started a company in Detroit called Commercial Art Products, which was divided into three areas, screen printing, embroidery and lettering. After my father Ernie returned from World War II, where he served as a Marine in the Pacific, he and my mother Ricki purchased the lettering part of the business from his father and renamed the company Stahls' Felt Stamping.”

Stahl’s parents ran the business for many years out of their garage in Roseville, Michigan with the help of their three sons Ted, Craig and Brian. Ted and his brother Brian purchased the company from their parents in the mid-70s, and it became known as Stahls’. Over the years, they have grown to become a leading international manufacturer and supplier.

“While we may be a family-run business, we consider our employees a part of the Stahl family and value what each of them bring to the table,” said Stahl. “I’m proud to uphold the reputation of our business year after year as we remain the innovator and leader in technology and decoration materials.”

The company works with their customers – from small businesses to little leagues and professional sports organizations and everything in between – to provide quality branding on nearly any uniform, T-shirt, accessory and sporting good. GroupeSTAHL has distribution centers throughout North America, South America, Europe and Asia.