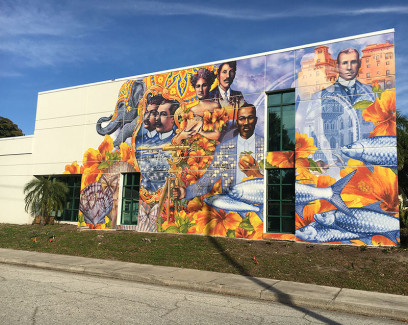 SpeedPro Affinity Solutions in Sarasota, Florida printed and installed a mural commemorating the 100-year anniversary of Sarasota County on the Sarasota Chamber of Commerce building.

The chamber and the Sarasota Arts and Cultural Alliance commissioned local artist Matt Myer for the original painting, intended to highlight the ‘Builders of Sarasota.' Once SpeedPro received the art, it was prepared for production and printed on 3M IJ180 vinyl using 3M’s 8510 Scotchcal Overlaminate. SpeedPro helmed the two-and-half-day installation, applying the vinyl and sealing its edges. The mural is expected to be displayed for two years.

The shop gave a quick Q&A to talk about the project and what it meant to be part of it.

Is this project typical of the type of jobs that SpeedPro Affinity Solutions undertakes?

Yes, SpeedPro Affinity Solutions has installed many murals on both the exterior and interior of various commercial buildings. They have created dozens of murals but this 50-foot wall was the first of that size.

Did you receive positive feedback from the client and the community?

The community and the client were over-the-top happy about the project! People go out of their way to drive past the murals and look at it because it speaks to the history of Sarasota.

Sarasota dignitaries were at the grand opening and were very impressed. 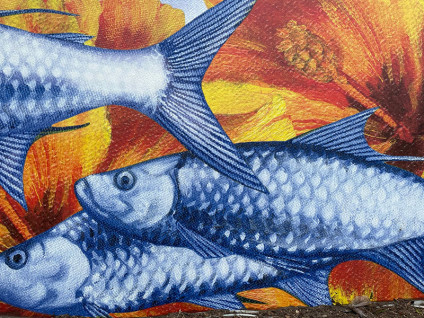 Was the artist pleased to see his painting scaled up and applied to a building wall?

The artist was amazed and quite pleased that his work was being presented this way, and that the clarity of his art was retained in the large size. Matt Myer had completed wall murals where he's painted it on the wall himself but this is the first time he's crafted something and had it digitized and blown up onto a building.

This is the first time the studio has ever done something like this.

Would SpeedPro Affinity Solutions like to attract more of these types of jobs?

SpeedPro Affinity Solutions is happy to create large-format wall murals. A lot of other people are doing temporary ones with banners but when the studio gets an opportunity to do a multi-year project, they jump at the chance.

Did you encounter any other obstacles during the job?

The Studio Owner of SpeedPro Affinity Solutions, Steve Rowe, inspected the entire wall beforehand and discovered areas with actual holes. Steve repaired the wall and cement patched places that would be problematic. Dedicated to executing the project properly and effectively, they put in the extra effort to ensure the wall was prepped ahead of time.

Also, the studio had to convert the art from a printed image to a digital one, and the size of the file structure was huge! They couldn't transfer the files to each other so they had to use a hard drive.

How did SpeedPro Affinity Solutions land this project?

Through hard work! Steve Rowe networked and established relationships with the executive director of the Arts and Cultural Alliance of Sarasota County (his wife is involved in their Arts Leadership Academy), and the CEO of the Sarasota Chamber of Commerce. After the chief editor of Sarasota Magazine had the idea of putting wall murals on the city of Sarasota, they discussed doing something different for the anniversary of Sarasota County.

After Steve introduced himself to these individuals - showing them what can be done, and illustrating how SpeedPro can bring their vision to life - the studio was brought on board.

What considerations did the team at SpeedPro take to ensure the mural lasts its intended two years?

In addition to carefully designing, printing, and cutting the panels to ensure that they were correctly installed, the SpeedPro Affinity Solutions team sealed and heat-rolled the entire wall in order to retain its form to the textured surface.

What type of printer was used to output the graphics?

SpeedPro Affinity Solutions used HP ink and an HP Latex printer, and a Kala laminator to laminate and cut the panels with an Esko CNC cutter.

"We're proud that we were asked to be part of Sarasota's history and to provide this mural for the county. We are grateful that we are able to be a part of this great area and we thank our partners for all of their help," says Rowe. "I thought I knew everything about printing but what we learned from this project was invaluable."

How Did COVID-19 Impact Catalogs?
END_OF_DOCUMENT_TOKEN_TO_BE_REPLACED