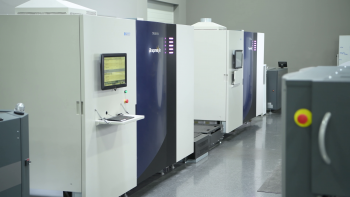 A few years back, Sacramento’s Document Fulfillment Services (DFS) was awarded a large contract with the potential for producing a minimum of 12 million, up to 100 million, impressions within a two-month time frame. “Our first plan of attack was to purchase and install an inkjet press, hoping that it would help us achieve this ambitious assignment. Unfortunately, the printer we purchased was not a SCREEN (Booth 10951),” reveals James Gilbride, president and CTO, DFS.

“Early in 2016, the market was in demand for color,” says DFS’ COO Daniel Chavez. “Making the transition to inkjet would be big for us. That’s when we started entertaining vendors for inkjet.” In December of 2016, DFS purchased a printer from a different provider.

From installation to training, DFS experienced nothing but problems. In fact, they tested that press for nearly a year. “We failed miserably,” says Gilbride. “We ended up doing only a portion of the project on that press. The majority of the 12 million impressions were run on our toner devices because we were struggling with the machine.”

Fast-forward to December 2017, and DFS was handed a similar opportunity to produce a job of between 12 to 100 million impressions. “It was time to make the switch,” says Chavez. “We pulled that unit and called SCREEN, saying we were ready to make a move. We needed to not only get that press in here during a holiday season, but fast-track the training.”

“I put a lot of pressure on SCREEN to get this press delivered, installed, and running ASAP,” Chavez says. “Our SCREEN Truepress Jet 520NX was installed within five days, and we had ink on paper within seven. We hit the ground running.”

Training the staff took roughly seven business days, and the Sacramento solutions company, using SCREEN’s Equios workflow, were able to spool and RIP more than 50,000 images in a matter of just a few seconds.

How much faster does the Truepress Jet520NX print versus toner based machines? DFS says they went from 300 ppm, using toner-based machines, to more than 1,000 pages per minute on the 520NX.

Because the Truepress Jet 520NX is so fast and so productive, DFS has eliminated an entire 40-hour work shift. Prior to installing the SCREEN 520NX, DFS was running 24-hours a day, five days a week. Since adding the Truepress, they have reduced their associated labor costs by a third, and now run the press 16-hours a day.

Chavez adds, “Being able to be agile, start to finish, including programming, processing, and creating a work order for a job, to getting it to the production floor and out the back door…shortening that timeline is big. The 520NX is a large part of hitting same day turns at a high-volume pace and that’s huge.”

One Film Does Not Fit All