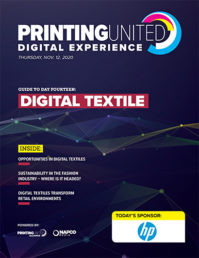 The final day of the PRINTING United Digital Experience was dedicated to Digital Textiles. To view the full sessions for the day, as well as access the previous days and the on-demand content — along with white papers, new products and more — visit digital.printingunited.com. And supplementary guides for each day, with even more content on each segment, is also available here.

To start the day, Dave Meleo, founder of StepRepeat.com, gave a keynote session taking a closer look at how he built his digital textile business, and the challenges he faced along the way that other shops can learn from.

From the beginning, he noted, the company targeted B2B companies, with a target average ticket of $500 to $1,000. His goal, he noted, was to have a good mix of clients. In his previous work as a commercial printer, when just one client was responsible for 30% to 40% of the work, he knew that losing them could put everything else into a tailspin. So, when building his digital textile business, he wanted to build a more diverse list of smaller clients, instead of just one or two large customers.

“I wanted to produce a product the client could set up for themselves,” he said, “receive it via FedEx, and have it look like they hired a professional company come set it up.” It took many years to get to that point, he said, but eventually he did get there.

One tip he shared is that early on, he lost a few potential clients because he didn’t have any hardware or stands to go along with the banners he was creating, so he ultimately decided to sell those as well. That proved to be a great move, and today hardware makes up a significant part of the revenue stream. For those looking to follow the same plan, he suggests keeping at least one to two months of hardware inventory in stock at any given time.

“When you get that call,” he said, “for 10 banners, and you have to have it out the next day, you’re not paying to ship express.” Having to cover the cost of rushed in-bound freight to meet a deadline could either force the shop to raise the price beyond what is competitive, or alternatively end up eating into the margins, to the point where the job ceases to be profitable.

Another thing to keep in mind, he cautioned viewers, is taking the time to understand the equipment and purchasing the right thing at the right time. He noted that he invested in a machine that wasn’t right, and it ended up wasting money, and losing valuable time to grow and learn. In part, going with small entry-level machines hampered his company’s growth. “You either go big or you go home,” he said. “If you have the busines for it, it’s worth it. My biggest mistakes in this industry, honestly, were not spending enough money on equipment. Trying to save money ultimately ended up costing money.”

What Do Brands Really Want?

As the technologies for digitally printing textiles have continued to improve, the opportunities are expanding. But what are brands and print buyers actually looking for, and what is holding them back from making the switch on a larger scale? Denise M. Gustavson, editorial director, Printing & Packaging, NAPCO Media, talked to two experts to learn more — David Clevenger, principal, Parallax Digital Studios; and Terry Combs, sales and training, Equipment Zone.

“What we see most is people being really focused on niche markets,” said Combs. For example, he noted his company has multiple clients who only print pillowcases, for a wide range of pillow types, mostly for online sales. Another focuses specifically on providing textiles for Etsy sellers. And that’s not a small business — that specific client has 12 DTG printers and five wide-format printers keeping up with the demand for this narrow market he has founded a successful business around.

A few of the things driving this slow expansion, noted Clevenger, include the fact that “quality is a non-issue” now, and turn times — another barrier to entry for digital textiles in the past — has gotten down to the point where it is a viable option for many applications, especially when some of its other benefits are factored in as well, such as the ability to have more robust customization options.

On the flip side, there are still a few things holding digital textile printing back. A big one is the lack of substrates for this space, with a limited number available that will work with the inks used in the digital processes without coatings or treatments, which in turn can impact the “hand feel” — or the way the textile feels when someone touches it. This isn’t a major issue for signs and banners, which continue to make up the largest portion of digital textile printing, but for textiles meant for garments or home décor applications, where consumers will be regularly interacting with the substrate, that can be a major issue.

That said, Clevenger noted one of the biggest roadblocks he runs into is the cost. “There is a cost differential with printing digital over traditional fabric printing,” he noted. “That’s probably the major drawback. It’s getting more cost effective; I think the speed in which we can turn projects and the quality we can provide offsets some of that. But again, that’s still the biggest resistance.”

Creativity, however, is the name of the game when it comes to showing brands how to make the most out of what digital printing can bring to textiles. There are a lot of misconceptions about the process that need to be overcome, and then PSPs need to take the lead to show designers how far they can push their ideas, and what new applications they can explore.

One idea: a PSP connected with a car company for a major automotive trade show — before COVID, of course — and brought several DTG printers directly to the brand’s booth, printing custom garments for each attendee who visited with the branding of both the company and the show. Something that couldn’t be done with traditional methods, but digital provided a unique experience for both the brand and their own customers. This type of application is one way PSPs can break into the digital textile space with brands, and start to break down the barriers to entry.

To get started, the panel first noted that the field is wide open — there are a lot of niches out there, it’s just a matter of finding one that works for your company and running with it. That said, they also stressed that PSPs need to focus on what the technology can print — don’t ask ‘can I print on that substrate,’ rather ask ‘will that substrate look good printed digitally.’ There are a few substrates and niches that work beautifully with digital technologies, and focusing efforts on those, rather than trying to force it to be a total replacement for everything screen printing could do, is the best way to build and grow a digital textile business.

Getting the Right Color

Ray Weiss, director of digital print programs for the PRINTING United Alliance, finished off the day with a panel session taking a closer look at color assurance when it comes to printing textiles digitally. He was joined by color experts Jim Raffel, CEO, Color Casters; and Mary Song, print production and color manager at Tectonics.

Raffel noted that when it comes to digital textile printing — or really any printing — the way to get colors to match is by finding a neutral grey balance, no matter what the substrate or ink technology is. He noted that rather than try to get a perfect match by the numbers, he instead focuses on getting a perfect visual match, since the way the eye perceives color is more important than hitting a target on a spectrum.

“A specification is not our eyes, it’s a bunch of numbers,” Raffel said. “The ultimate arbiter of color is a human being, and that means our eyes are going to be involved.” He noted that, in reality, there is probably never going to be an absolute perfect color match in the print industry. More realistically, however, by using a combination of tools such as measuring the Delta E and by employing visual match algorithms, shops can get a very good match across any substrates, created on any digital press, using any type of technology that only the most discerning eye will ever notice a variation.

But how do you get to that point? Song noted that it’s about getting back to the basics, and identifying what you need to control:

“I take tons of notes, and I try to control everything I possibly can,” Song noted. “It’s not always easy, but you try to do your best — and with sublimation it’s a lot more difficult.”

Getting “good enough” color with your printer is the ultimate goal. Some printers, Song noted, tend to be more stable, while others can be more challenging, but it all comes down to the data. “Data. Data. Write everything down. Take lots of notes. Establish a baseline.” In fact, she said, she starts with one printer and establishes a baseline for that, then moves on to the next, establishes a baseline, and then matches them, etc. She uses a wide range of tools and processes to create a system of actual color control, rather than just opinions about whether the color is “right” or not.

She goes so far as to keep a file for every printer under her control, with all of the data, notes, and even printed visual references she can refer back to and match against later if something needs to be recalibrated. In fact, she uses a checklist to ensure perfect color in every situation. If there is a problem anywhere, she starts at the top, and works her way down this list until she finds where the issue is:

“With color management, the biggest thing to take away,” Song said, “is to not be afraid to make mistakes. It’s okay if the color profile doesn’t come out the right way the first time. You can do round two. Or round five. And don’t be afraid to take a step back. I’ve done step one in the color management process in our RIP, and went to the second step and said, ‘you know what, I don’t like that, I’m going to go back.’ And that’s okay. It’s not the end of the world.”

And with that, the 14-day PRINTING United Digital Experience came to a close. To go back and watch Day 14 — or any of the sessions, on-demand videos, new product demos, and more — debuted during this virtual extravaganza, it will be available through January 31, 2021 at digital.printingunited.com. And don’t forget to download all of the supplementary guides for each day, with even more content, here.

The Outlook for Print in 2021
END_OF_DOCUMENT_TOKEN_TO_BE_REPLACED