Practicing the Art of Self Promotion 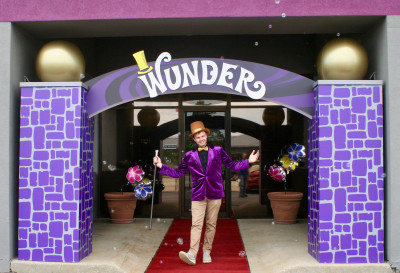 For many printers, self-promotion is not high on the priority list. Often, it is a secondary task the owner or a manager takes on when, and if, there is time. It is inconsistent, if done at all, and if the results aren’t immediate, it tends to be abandoned quickly. But self-promotion is a key factor in the success of all businesses — whether they know it or not.

First and foremost, it is important to separate “self-promotion” from “sales” efforts. While they have similar goals, self-promotion is a much less targeted way to go about it. The goal isn’t necessarily to be able to track X number of jobs to Y promotion, as a shop would be able to do with direct sales calls. Rather, it is about creating awareness, which is what increases sales numbers.

“Marketing is about stocking the pond,” says Bill Farquharson, president of Aspire For and a sales trainer for the graphic arts industry. “You want someone to call you and say ‘I see you’ve solved a problem for someone else. I’ve got that problem and I need your help.’ That’s the ultimate goal. Build the credibility, differentiate yourself and the sales call has been made for you.”

The Business of Building Relationships

Many times, a key ingredient in self-promotion and creating awareness lies in building relationships with existing and potential clients. Eagan, Minn.-based Big Ink focuses on this aspect of self-promotion when it plans its events. Recently, the company began pedaling around to various clients in the area on something deemed the “Treat Trike.” Tom Trutna, president and founder of Big Ink, explains that he bought a Dutch cargo bike and converted it into an ice cream cooler two years ago. Big Ink wrapped the cargo bike in its branding, produced a custom umbrella and aprons to go along with it and began visiting prospects and clients with ice cream treats in tow. This is how the Dream Cycle event was born.

“We’ve found that it’s so difficult to get ahold of clients with either voicemail or email, that you end up behind this electronic wall,” he says. “This was an old fashioned way to get out and talk to customers. We weren’t selling anything specific, however we were showing them a custom wrapped vehicle, umbrella, aprons and social media frames, all of which we produced.”

The Dream Cycle serves as a way for Big Ink to interact with prospects and clients in a fun and relaxed environment.

Not only is the Dream Cycle an opportunity to promote Big Ink’s capabilities, he adds, but it also acts as inspiration and encouragement for prospects and clients to connect with Big Ink on more than just printing. The tagline of the Dream Cycle event is “Bigger Thinking,” which demonstrates Big Ink’s ability to conceptualize and come up with out-of-the-box ideas.

For something a little closer to home, inviting prospects and clients into your facility can work as a way to build relationships and, in turn, promote capabilities and bring in new customers. Color Ink, based in Sussex, Wis., employed this method when it transformed its facility into every child’s dream: a chocolate factory. 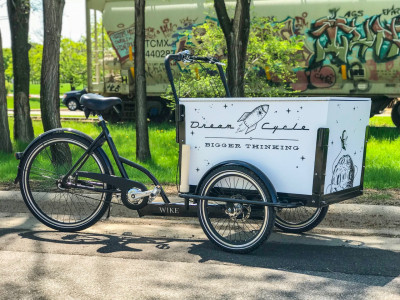 Big Ink wrapped a cargo bike in its
branding and began visiting prospects
and clients with sweet treats as part of
its Dream Cycle tour.

The “Golden Ticket” was meant to showcase the embellishment capabilities of the MGI JETvarnish 3D. When the device was purchased, it was clear an open house would be necessary to show off what it could do.

“We had a hard time wrapping our minds around the technology and understanding its fit in the marketplace when we first saw it,” Todd Meissner, president of Color Ink, says. “If it took us a while to wrap our minds around it, we knew that we had to go above and beyond to get our customers to understand it.”

That’s why six months after it was installed — in January 2018 — Color Ink hosted the open house to introduce customers and prospects to the new device. The “Golden Ticket” theme was born from the feeling the MGI JETvarnish 3D has brought to the company, one of whimsy.

“We view it as somewhat magical,” Meissner says.

Throughout the facility, Color Ink showcased not only its embellishing capabilities, but its wide-format printing assets and general ingenuity when it comes to printed products.

“We’re just trying to tell the story that we’re all about bringing a variety of visual solutions that could involve more than just ink on paper,” Meissner says.

Big Ink has also used the strategy of inviting prospects and clients into its facility with “Brunch and Learns.” Trutna explains that Big Ink has had several breakfast events showcasing materials and ideas based around a single theme. For example, at the “Out of This World” brunch event, Big Ink created materials designed around an intergalactic theme.

“The brunch thing has, kind of to my surprise, worked out better than any of the happy hours or quick lunches that we’ve hosted,” he says.

Using Education to Inform and Promote

While open houses and similar events serve as resources for prospects and clients to understand a printer’s capabilities, true educational sessions and panels can be sources of value that go beyond a straight sell.

Educational sessions are something Cushing, based in Chicago, has used to its advantage on multiple occasions. Jon Davis, marketing manager at Cushing, describes one such event when Cushing brought in an Adobe expert to provide a training lesson in Photoshop and InDesign.

Davis explains that Cushing reached out to some of its marketing contacts to gauge whether or not an Adobe workshop would be of interest. In the end, it ended up bringing in marketing managers, directors, coordinators and more, for an expert-led training session. The event not only brought value to the attendees, it ultimately brought value to Cushing.

“We were hoping they would see the value in coming out to Cushing,” he says. “Maybe get there a little early, take a tour and learn a little more about what we do. ... It keeps us, we’d like to think, top of mind. There’s a lot of people doing what we do, so we’re hoping they’ll think of Cushing the next time they have a project.”

The educational sessions don’t have to be limited to something that is directly relevant to clients at the current moment. An educational session can also introduce prospects and clients to trends and opportunities. Take, for example, Cushing’s “Lunch and Learn” on artificial intelligence (AI).

“I think I read a couple of articles where it said something like 60% or 70% of marketers were not really sure how to leverage AI in their marketing and were trying to understand opportunities in the next five to 10 years,” Davis explains.

He brought in a local digital marketer to speak about AI and provide real world examples of how it is being used by some of the biggest brands on the market right now.

Providing valuable resources helps to build trust between a company and its prospects and clients while strengthening the connection they share.

Collaboration is also a solution to providing educational resources for prospects and clients. Davis describes a recent event Cushing hosted with one of its clients, the Design Museum of Chicago. Cushing collaborated on an educational panel with the Design Museum of Chicago.

The Museum approached Cushing about putting together a presentation on a topic for graphic designers and marketers. Davis says it was decided that the topic should focus on the trend of companies collaborating with artists to create art pieces for their buildings and public spaces, which is something Cushing had worked on in the past. Davis explains, though, that instead of presenting on the topic, Cushing had an opportunity to put together a panel of individuals who had experience with this type of project, including a representative of Cushing to talk about the logistics of producing the work. The panel focused on the trends of large printed art pieces being used for company workspaces, and touched on the opportunity to work with a printing company to make it happen.

The Design Museum of Chicago promoted the panel on its social media pages and in its email newsletter. It also linked to Cushing’s website, which added extra exposure for the company.

“Our sales team walked out with a couple of contacts to have additional conversations,” Davis says. “I walked out with a panelist saying ‘You should talk to so and so for the next [panel] that you pull together.’”

The event gave Cushing exposure to a new audience and served as a way to have conversations with potential clients.

Putting your plans Into Practice

Knowing that self-promotion is the key to growing long-term business is one thing. Knowing how to execute it is something else entirely.

According to Farquharson, one of the absolute keys to self-promotion success is to actually do it.

“Back in the day, people used to say, ‘let’s do a newsletter,’ and they would produce one but then never do another one,” he says. “It was just too much work editing it and pulling together the stories, so there was never a second version. The problem is that people start with good intentions, but they don’t follow through.”

Another key to success, Farquharson contends, is to be remarkable. Self-promotion is something that allows a shop to show off, to give potential customers a taste of what they could be getting if they bring their business over. Using different types of paper stocks, for example, might get a businessperson to stop and take notice. Sending mailers in unusual sizes is another technique to make a piece jump out from a crowded mailbox.

Trutna also points to follow-through as a difficult aspect of self-promotion. He explains that it may be easy to come up with ideas, but following through takes time and dedication.

“We can come up with lots of great ideas, but making them actually happen tends to be the hard part,” he says. “Now that we’ve got the template down [for the brunches] it’s easy to replicate. … We’re always looking for new and interesting things and new ideas, but also replicating the ones we’ve had success with.”

Testrite Launches Made to Order Tables and Parts

The Value of the Vehicle Wrap

Make Sure You’re Not Leaving Profits on the Table

How Did COVID-19 Impact Catalogs?
END_OF_DOCUMENT_TOKEN_TO_BE_REPLACED