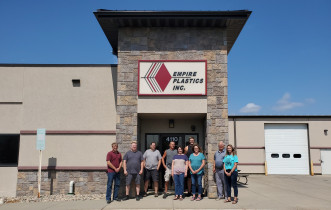 Piedmont Plastics, a premier wholesale distributor of plastic sheet, rod, tube and film, proudly announces its expansion in the Upper Midwest through the acquisition of Empire Plastics, Inc. located in Sioux Falls, SD.

Empire Plastics has built a reputation based on expert knowledge and service over the past 28 years and their current customer base serves as a great foundation for continued growth in the Heartland. Piedmont Plastics is retaining the current Empire Plastics building in Sioux Falls, which marks its milestone 50th branch location in North America. All Empire Plastics, Inc. employees will be joining Piedmont Plastics in addition to Doug Edwards, former owner, who will remain on board through the end of the year to assist with the transition.

“We are excited and grateful to have the Empire Plastics, Inc. family join ours,” said Tyler Booth, President of Piedmont Plastics. “This part of the country is a natural extension of our growing branch network and we feel that Empire Plastics is a great fit both culturally and strategically.”

“We are eager to have Empire Plastics join the Piedmont Plastics organization,” said Doug Edwards. “We look forward to continuing to serve our customers and provide them with the excellent products and services they’ve grown to expect from us over the years.”

The Outlook for Print in 2021
END_OF_DOCUMENT_TOKEN_TO_BE_REPLACED