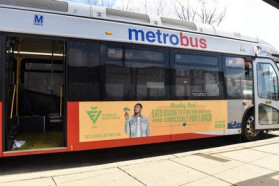 NEW YORK -- March 4, 2019 -- OUTFRONT Media Inc. today announced its collaboration with Partnership for a Healthier America (PHA), a nonprofit devoted to working with the private sector to ensure the health of our nation's youth by solving the childhood obesity crisis. As part of its mission, PHA works with the private sector. PHA brings together public, private and nonprofit leaders to broker meaningful commitments and develop strategies to end childhood obesity in addition to driving demand of fruits and vegetables with its FNV campaign (which stands for "fruits and veggies"), which was recently launched in the Washington, D.C. metro area.

With the goal of encouraging consumers to make healthier eating choices, Metro Buses in D.C. are showcasing celebrities and athletes, including Steph Curry and Regina Hall, a native of Washington, D.C., and more, choosing fruits and vegetables as their go-to snack. OUTFRONT Media's premium transit assets reaches target audiences, as well as multiple touchpoints throughout a consumer's day. Beginning February 11, 2019, FNV creative can be seen on MetroBus exteriors in wards seven and eight.

"We created the FNV campaign to change the way children and young adults think about fruits and vegetables," said Savannah Knell, Campaign Manager at Partnership for a Healthier America. "By partnering with OUTFRONT Media we were able to amplify this effort and meet our target audience right where they live and operate, where our message could make the highest impact."

"OUTFRONT is always looking for opportunities to support communities, whether that is through bold content, bright illustrations or important messages, and we immediately connected with Partnership for a Healthier America's goal of raising awareness around childhood obesity," said Aaron Bronson, General Manager of OUTFRONT Washington, DC. "Buses serve as 'rolling billboards' traveling in and around densely-populated city streets, leaving a lasting impact on pedestrians, motorists and passengers, making them the natural choice for such an important message."