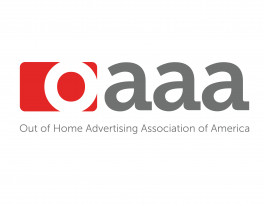 Out of home (OOH) advertising revenue rose 6.0 percent in the first quarter of 2019 compared to the previous year, accounting for $1.78 billion, based on figures released by the Out of Home Advertising Association of America (OAAA). The revenue increase marks nine years of consecutive growth for the OOH industry.

“OOH continues to grow ad spend revenue because of its effective mass reach," said OAAA President & CEO Nancy Fletcher. "We’ve seen a marked rise with direct-to-consumer businesses, in particular, along with continued use by major tech brands, which use OOH to drive digital engagement.”

“OOH audiences are younger and more affluent than the average US consumer, and that’s very attractive to many brands,” said Stephen Freitas, OAAA chief marketing officer. “And, a new Nielsen study found 66 percent of smartphone users have been prompted by an OOH ad to take some type of action with their phone.”

OAAA issues full industry pro forma revenue estimates that include, but are not limited to, Miller Kaplan and Kantar Media (which is not adjusted to reflect changes in data sources), and member company affidavits. Revenue estimates include digital and static billboard, street furniture, transit, place-based, and cinema advertising.