Memjet announces that OPM Europa BV in Tilburg, Netherlands, has combined robotics and Memjet’s VersaPass technology to create a direct-to-shape printer called LabelSaver. OPM’s LabelSaver integrates its own robotic system with the Memjet-powered Trojan Label print engine and proprietary coatings to create a self-moving printer that shows the possibilities of label-less production.

In recent years, the proliferation of SKUs and increased demand for short-run labels have driven small manufacturers to look for more economical ways to label their products. Dursun Acun, founder and European sales director at OPM Europa BV, set out to provide a solution to this challenge by integrating robotics into label production to create label-less production that would improve the speed, cost and environmental impact of label printing.

Once Acun developed the robotic technology, he needed a printing technology that could bring the device to life and support his goals of efficiency, economy and improved environmental impact. After considering several technologies, Acun chose to work with Trojan Label and include Memjet’s VersaPass printing technology in his solution. Memjet’s combination of innovation, speed, simplicity and affordability made it the right choice for the LabelSaver solution. 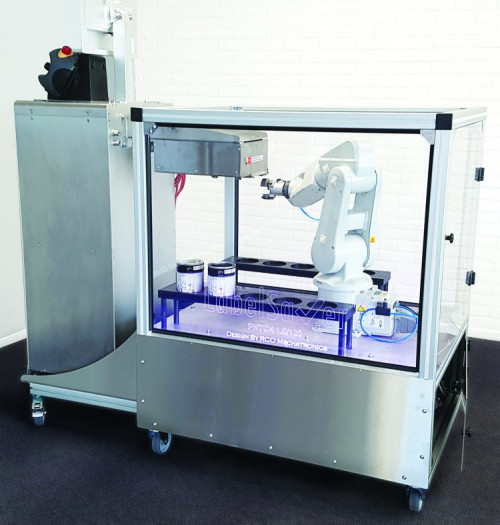 “VersaPass has the unique combination of features needed to realize my vision of true label-less printing,” said Acun. “Not only could VersaPass produce four-color, high-quality printing from one printhead, its water-based inks make it safe to use in most environments, including food, which is important to us as we look to expand our markets.”

The LabelSaver prints high-quality color directly on a variety of objects, including jerry cans, metal paint cans and plastic containers The LabelSaver can print at a rate of 500 jerry cans per hour in full color, 360 degrees. The solution is also capable of printing on Memjet-receptive coatings for flexible packaging and films.

Memjet’s Senior Vice President Russell Boa said, “LabelSaver has given us a glimpse into the future of the label printing process. This printer shows us how robotics and the right printing technology can work together to improve operational efficiency and be more responsive to their customer’s demands. We envision a future that gives manufacturers a whole new way to approach the production and application of labels.”

Xen Industries: Turning an Artist's Vision into a Fashion Statement

The Future of Fashion is Data & Digital Printing

A Spoonful of Digital Helps COVID-19 Go Down