Designers and printers are among the businesses reviving Brooklyn landmarks. Around the world, in cities including New York’s borough of Brooklyn, municipalities and private institutions are creating innovation hubs in abandoned and underutilized manufacturing and warehousing buildings, navy yards, and other landmark locations. With a mix of enterprises from a variety of industries and business sectors including graphic communications, they foster a sense of community and cross-pollination of skills and expertise that drives growth.

Inspired by an April 2018 Forbes article by Michelle Greenwald (“A New Wave of Innovation Hubs Sweeping the World,” April 2, 2018), this article examines the role of design and print at five innovation centers in Brooklyn: the Industry City neighborhood, the Brooklyn Navy Yard, the Greenpoint-Williamsburg area, the Pratt Institute’s Brooklyn Fashion & Design Accelerator in the Clinton Hill neighborhood, and New York University’s (NYU) Tandon School of Engineering, which is housed in an industrial building near the Brooklyn Bridge.

Its predecessor, Bush Terminal in the Sunset Park neighborhood of Brooklyn, dated back to the 1890s, a multi-building hub for manufacturers, distributors, and warehouses that eventually employed more than 24,000. Its proximity to the adjacent Brooklyn seaport helped to establish its piers as an international shipping destination. But as container shipping and its requirements led to the decline of the Brooklyn piers — and urban manufacturing began declining in the 1960s — businesses abandoned the Brooklyn complex. In 2013, developers came in to revitalize what’s now called Industry City.

Today, Industry City includes 18 buildings — 6-million-sq.-ft. of workspace — and more than 35 acres. Its resident companies employ about 7,000 workers involved with design, engineering, development, and manufacturing of products, including printing. It houses studios for about 100 artists, about an equal number of design and architecture companies, almost 50 media companies, and about 80 production and manufacturing companies. Industry City also serves the neighborhood with restaurants, shopping, and entertainment.

Creativo Surface Design Studio is one among the many design companies at Industry City. It provides prints and patterns for the apparel, home furnishing, T-shirt, gift, and paper goods markets. Alexsandra Ortiz directs the company’s creative team of two in-house designer illustrators and more than 10 designers from around the world.

Industry City also formed and promotes The Collision Project, “a diverse and flexible testing ground for artists and visionaries of all disciplines to collaborate and discover at Industry City.” The Project promotes the collaboration of the campus’s artists, designers, academics, entrepreneurs, and manufacturers to “facilitate and activate new areas of co-creation.” It provides the campus’s public space “as [a] test site, interactive lab, and exhibition gallery dedicated to the visual manifestation of an intersection of ideas.” 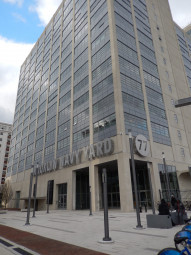 After 150 years of building ships there, the U.S. government closed the Brooklyn Navy Yard in 1966. Plans for an automaker to take over the site did not come to fruition, and the buildings remained little used. The city of New York acquired, managed, and developed the site over time. Steiner Studios, the largest cinema production studio in the northeast United States, moved into the yard in 2003. Since then, more than 300 businesses of various specialties have established operations in the Navy Yard. They include designers, printers, artists, craftspeople, manufacturers, metal fabricators, coffee roasters, food producers, a brewery, a whiskey distillery, and a rooftop farm and vineyard. The Yard houses the City University of New York (CUNY) Feirstein Graduate School of Cinema, and the New Lab, where about 100 developers of advanced technologies — including robotics, artificial intelligence, and nanotechnology — have set up shop.

Several printing companies operate at the Yard, adding their expertise to the mix of innovators and manufacturers. Among these are Duggal Visual Solutions, Abby Lichtman Design, ARES Printing & Packaging, Mullin Studio, Roboto.NYC, and Woodside Press aka Briar Press.

Duggal Visual Solutions incorporated in 1963. In addition to its corporate offices at the Brooklyn Navy Yard, it has a retail space on West 24th Street in Manhattan, and operations in Portland, Ore. It occupies parts of five buildings at the Navy Yard. Duggal provides photographically and digitally printed visual images, custom displays, and multimedia solutions. Its customers include major retailers and corporations, museums, galleries, photographers, artists, and designers. It operates round-the-clock and ships worldwide. The company has 30 wide-format digital printers with print widths of 60" or greater. It also boasts an HP Indigo 12000 B2 digital press.

ARES Printing & Packaging describes itself as a manufacturer and designer of paperboard, E-flute and B-flute, folding cartons, and point-of-purchase (POP) displays since 1979. The company provides advanced package engineering, design development, printing, and production at its Brooklyn Navy Yard location. ARES reports to have the two largest sheet-fed printing presses in New York state: a seven-color Planeta 44x64" press, and a six-color Roland 40x56" press, both of which have in-line tower coaters. ARES offers CAD/CAM computer design and sample making, digital, and conventional proofing. It provides a pre-press department featuring a step-and-repeat imposing system. It offers multicolor printing, in- and off-line coating, hot leaf stamping, diecutting, windowing, embossing, and flute lamination. ARES has been a leader in adopting environmentally considerate and sustainable production systems, printing exclusively with non-solvent water-based inks, coatings and finishes, and proclaims its commitment to sustainability.

Roboto.NYC is a light fabrication service specializing in 3D printing, 3D scanning, laser marking and cutting, CAD, and model making. Co-founders Alijosa Kemperle and Robert Steiner were former MakerBot employees who set out on their own to create opportunities for their customers, including retailers, museums, galleries, engineers, and artists, to cost-effectively design and execute displays, replicas, art objects, prototypes, and parts.

Woodside Press is a letterpress printing company. Woodside Press offers customers the use of hundreds of metal and wooden typefaces and classic ornamental material. It also offers hot-metal casting of fonts and ornaments.

The Williamsburg and Greenpoint neighborhoods — adjacent to each other — had large industrial buildings that were vacated and became available to Brooklyn and New York City’s creators, entrepreneurs, and innovators. As with the Brooklyn Navy Yard and Industry City, the buildings that past industries abandoned became opportunities for incubating the next waves of innovation.

At the AATCC-SGIA Digital Textile Printing Conference in Durham, N.C., in December 2018, Mark Sunderland of Thomas Jefferson University spoke about the digital dye-sublimation prints that his students used to decorate parts of shoes they made at the Brooklyn Shoe Space in Brooklyn’s Williamsburg section.

Adidas built its Brooklyn Creator Farm with a designer area and a MakerLab in a renovated Greenpoint warehouse. The design space serves Adidas designers from studios around the world, with designers from Germany and Portland, Ore., complementing a resident design team. The design space configuration and culture encourage collaboration. Its MakerLab, one of three that Adidas operates, contains the machinery and materials needed to transform the designers’ ideas and designs into shoes and apparel.

The Richemont Group (Cartier & Van Cleef & Arpels) established a creative design studio in a renovated office building in the area. VICE Media, a $4 billion media brand, produces news, information, and entertainment and employs about 1,000 at its 75,000 sq. ft. of studios and 125 video-editing suites in the former home of Domino Sugar in Williamsburg. Colossal Media, which reports to be the largest global producer of hand-painted outdoor advertising and mural art also resides in a revitalized Williamsburg factory structure.

The Pratt Institute’s Brooklyn Fashion + Design Accelerator (BF+DA) resides on the seventh floor of a former Pfizer pharmaceutical laboratory and production facility, between the Bedford-Stuyvesant and South Williamsburg neighborhoods. Pratt promotes BF+DA as “a hub for ethical fashion and design that provides design entrepreneurs, creative technologists, and industry professionals with the resources they need to transform their ideas into successful, triple bottom line businesses.” (Triple bottom line business is an accounting framework that includes social, financial, and environmental components.)

BF+DA provides its students, Venture and Research Fellows, and its clients and members the use of the production, research, conference, and workspaces. 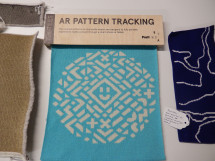 The Pratt Institute’s Brooklyn Fashion + Design Accelerator functions as a research hub where ideas develop to commercialization. Featured here are Thermochromatic Yarn, which changes from grey to clear when heat is applied, and an AR Pattern Tracking textile swatch which is designed to activate augmented reality content when scanned with a smartphone or tablet.

Executive Director Debera Johnson underscored the role of BF+DA as a research hub where ideas develop to commercialization.

During an in-depth tour of the facility, Johnson emphasized BF+DA’s commitment to advancing sustainability and the need for investment in the fashion industry. “It takes money to get things done,” she notes.

Johnson poses BF+DA’s educational challenges, “How do we provide smarter people with integrity, a model for what the nation should be doing.” BF+DA works cooperatively with other educational institutions including Cornell University, NYU, North Carolina State, Oberlin College, and Parsons School of Design.

When it comes to educating designers, Johnson says, “How do you put gravity around ideas? By touching what you are learning.” At the Cut-and-Sew and Knit sections of its Production Lab, students, Fellows, and clients touch and process prototypes, samples, and short runs of what they have designed. Johnson showed the Accelerator’s three Shima Seiki knitting machines, HP inkjet wide-format printer, weaving devices, and cutting and sewing equipment. She also displayed many examples of weaving and knitting innovations, including 3D knitting and weaving conductive circuits into fabrics — some with body function sensors, some with LED lighting, and some with heating elements.

Johnson says the role of BF+DA was not abstract, but one of putting knowledge into practice and “not trying to sound smart, but trying to get things done.” She recalls the words of a role model educator who would greet incoming design students with what awaited them in the charge of their chosen field to strive for continuous improvement: “Welcome to industrial design. You will never be satisfied again.”

Brooklyn has become a center for incubator hubs where innovators create, communicate, cooperate, and cross-fertilize ideas into products and solutions for the next wave of innovation. The borough, entrepreneurs, and educational institutions are renovating abandoned and underused industrial buildings, and reviving them with innovative designers, printers, technology developers, and new industries and businesses. Designers, printers, and 3D additive manufacturers are a vital part of this mix.

Innovation incubators can be found in other locations in Brooklyn and the other boroughs of New York City. NYU maintains an engineering innovation center at the above-mentioned NYU Tandon School of Engineering, located in a revived Brooklyn industrial building. In Manhattan, the Impact Hub New York on lower Broadway offers a workspace and more for innovators, as does MasterCard NYC Tech Hub on the edge of the Chelsea neighborhood. PepsiCo has a design and innovation center in SOHO for developing new ideas — many of which involve print — for its brands. At the Museum of Art and Design at Columbus Circle, one floor houses a rotating workshop and exhibit of innovative graphic artists and designers. The list of innovation centers in New York City runs on. In almost all of these innovation hubs, 2D and 3D print imaging and design provide essential ingredients for the success and growth of innovation.

Vince Cahill began screen printing in 1969, eventually managing an operation in Frederick, Md., and establishing The Colorworks, a custom screen printing business with his wife, Claire Hunter, which they sold in 2008. In 1995, they established VCE Solutions, a print consulting business. In 2003, they formed Industrial Printing Solutions to distribute digital printers.

The Trends from SGIA’s 2019 Benchmarking Reports