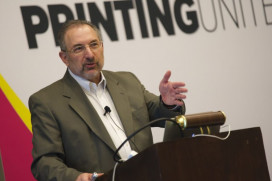 “The state of the industry is strong.” That was how Consultant Howie Fenton characterized the in-plant industry in his PRINTING United session, “Next Generation Tactics and Strategies for In-plant Service Providers.”

Fenton reviewed some of the top-level results of a survey of In-plant Printing and Mailing Association (IPMA) members, conducted in April 2019 and sponsored by Canon. It revealed a lot of good news for in-plants.

Eighty-six percent of respondents said they met their financial objectives in the last year, and another 12% were close to doing so. When asked about their equipment needs, 59% said that most of theirs were up-to-date, while 37% claimed to have a mix of old and new equipment.

Those thinking about purchasing new equipment indicated that their greatest need lies in finishing (48%), just ahead of large-format and signage at 43%, and well ahead of digital printing at 18%.

Asked which jobs are growing fastest, 74% of in-plant respondents said digital color printing; large-format signage came in at 68%. However, faster turnaround was mentioned by 58% of respondents. According to Fenton, this represents the “Amazon effect” — the expectation that a customer experience should be quicker and easier.

“We have to consider how well we are offering our services,” said Fenton.

Respondents also identified a number of challenges facing their in-plants. Training customers to better prepare files was the most common response at 37%, followed closely by finding and hiring good staff (35%). Fenton offered a variety of strategies to overcome staff issues, including:

Fenton also called sales and marketing “one of the greatest issues in-plants are facing.” While more than half report issues with staff and funding, others reported strong support from administration (19%) and having one or more sales people on staff (10%).