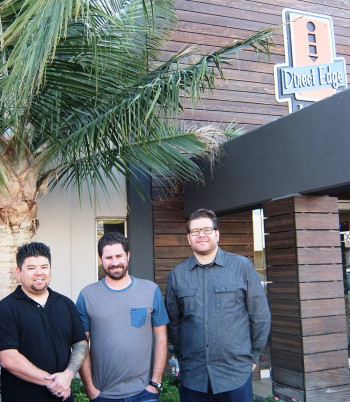 “The Onset X3 is what I consider the top of the line in the flatbed world,” says Ryan Clark, co-founder and president, Direct Edge Media. “We’ve been part of the Fujifilm family for a long time; from their presses that were doing 10 beds an hour, and now we are highly productive with up to 200 beds an hour. We’ve regularly upgraded within Fujifilm’s line-up of presses, and it’s been a great relationship.”

With a maximum throughput of nearly 10,000 sqft/hr, the Onset X3 is ideal for companies producing fast-turnaround graphics. A choice of unidirectional, bi-directional, and super high-quality print modes can be selected depending on the job requirements. Direct Edge Media’s Onset X3 features two channels of white ink, as well as a semi-automatic robotic handling system.

“The defining feature of our Onset X3 is the robotic handling system,” says Brueckner. “I think it’s the best material-handling exit and feed that I’ve ever experienced. It can handle flexible substrates extremely well.”

“With the Onset X3, we have the ability to produce jobs quicker, and at a higher volume,” says Nick Oshiro, VP of operations, Direct Edge Media. “We decided to have two white ink channels to produce more jobs in-house. The Onset X3 helps us stand out purely due to the speed and quality.”

The Onset X3 sits at the ‘pinnacle of productivity,’ and new abilities and capabilities give Direct Edge Media added opportunities and growth potential with existing clients, as well as opening the door for new clients as well.

“Recently we completed a very large lenticular job on the Onset X3,” says Brueckner. “We were able to successfully run over 1,000 sheets with a four color process, and a white ink layer.” Adds Clark, “A colleague suggested it would take weeks to complete the lenticular job, and with the Onset X3 we had it done in a couple days.”

“There is a reason we are a ‘Fujifilm House,’ because when you have critical mass, and if you ever need anything, there is a big team of people that will support you with quick results,” says Brueckner. “In my career, I’ve had production issues with equipment from other manufacturers, and we would be down upwards of five days. That has not been our experience with Fujifilm.”

The Outlook for Print in 2021
END_OF_DOCUMENT_TOKEN_TO_BE_REPLACED