…of a lovely print shop, who found success in Hollywood. 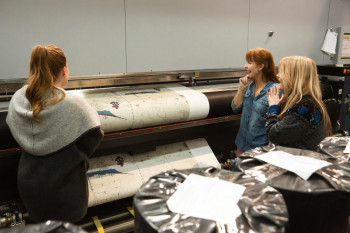 Mina Starsiak Hawk and Karen Laine from the HGTV show Good Bones, along with Susan Olsen, who played Cindy on the Brady Bunch, watch the custom wallpaper for the boys' room being printed at Astek. Photo courtesy of HGTV

If you are a fan of home improvement shows or DIY projects, odds are good you watch HGTV. And if you do watch that channel, then you probably also know the network is currently promoting a limited run series where it purchased the house that was used for the exterior shots of "The Brady Bunch" television show, and is now renovating it from top to bottom to match the sound studio version of the home that viewers know and love.

Even for those born after "The Brady Bunch" was no longer airing, it would be hard to find someone who hasn’t heard of the famous family. The  show ran for five seasons, with 117 episodes — from Sept. 26, 1969, to March 8, 1974 — and spawned several spin-off series and movies. Even today, quotes from the series remain part of the social lexicon (for example, if you say "Marsha, Marsha, Marsha!" to someone, it would be more of a surprise if they didn’t know what you were talking about, than if they did), making it an enduring part of our collective media landscape.

All told, the stars, actors, and crew put in more than 9,000 hours of demo and renovation, with the entire process captured on film. It is airing now on the home improvement channel.

But What About the Print?

While you might love "The Brady Bunch," you might also be wondering what it has to do with print. And the answer is: a lot. One of the main goals of the project was to get the renovated home to look as close as possible in every way to what viewers saw on their television sets. While the crew did have to take some liberties with the layout, when it came to the décor and overall look and feel they weren’t willing to compromise.

And that is where Astek Wallcovering came in.

President of the Van Nuys, Calif., shop, Aaron Kirsch, notes that, “We have done a lot of replication work for Hollywood for many years, and we’re in the Art Directors Union. So we were referred to the HGTV crew by the production designer who did the sets for shows like 'Friends,' 'Drew Carey,' and 'Big Bang Theory.'” 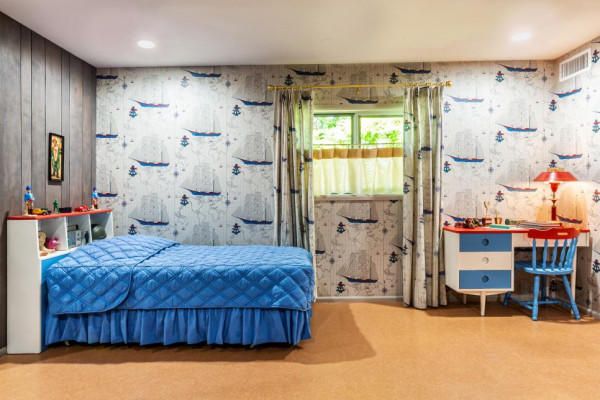 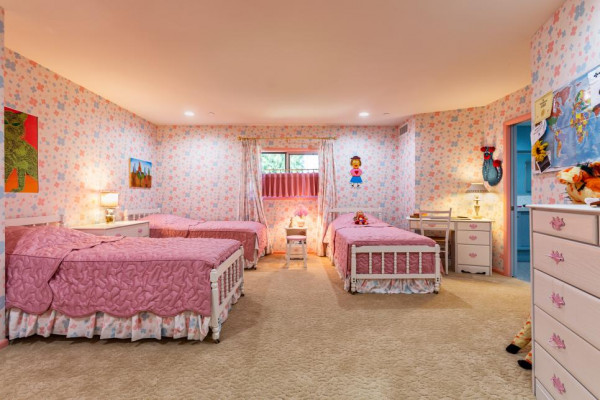 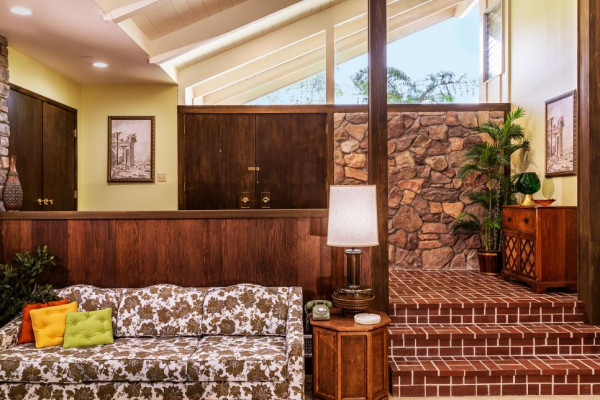 Kirsch notes that his team was involved in a range of projects throughout the entire renovation, several of which are highlighted in the show as it airs on HGTV. One of those projects was the living room couch, which appeared in the first episode.

“They were bringing us all these images of non-digital pieces that we had to try and replicate from,” Kirsch says. “It was a challenge to do from old, straight analog images. But we had a lot of input from the people at HGTV and 'The Brady Bunch' crew. They would tell us ‘that green is off,’ or ‘the leaf needs to be bigger/smaller.’”

While the show split the work into a series of episodes, the reality is that all the work was happening around the same time. So for Astek, Kirsch notes that the entire job, from his end, took around four weeks total.

“They were really concise,” he notes. “They wanted everything to look original, so for the couch, for example, we took about 10 days on and off of design time and color matching, with two designers on the project.”

The work for the "Very Brady Renovation" project was done primarily on Durst technology, Kirsch notes, with several different models in use throughout the 23,000-sq.-ft. facility.

“We mostly use Durst,” he notes. “We have a lot of them, and they are very reliable.” In fact, Kirsch notes that he is currently in negotiations to purchase the company’s latest press — a purchase he hopes to be able to officially announce at PRINTING United in Dallas, Oct. 23-25.

For Astek Wallcovering, "The Brady Bunch" is just the most recent in a long string of work for properties on both the large and small screen. Kirsch has been running the business for more than 30 years, with digital printing being his primary business for the past 20. And in that time, he has built a solid reputation that makes his company a go-to for Tinsel Town.

“We’re working on projects from around the world, from hospitality to feature film,” Kirsch says. “We’re a grand-format printer, mostly, but we do take on specialty projects as well. We print a lot of vintage linoleum floors for films and TV, for example. And we print on a lot of different fabrics for Hollywood, to create fake blankets or logos, that sort of thing.”

He continues, “we work on a lot of vintage pieces too, and we even have a library of original wallcoverings all the way back to the 1700s. I’ve been archiving those for more than 35 years, and it’s fun. That’s always a challenge when it comes up, but my design team is wonderful, and I’m proud of the work they do.”

Some of the more well-known projects Astek has worked on include creating vintage styles for the remakes of the television shows "The Jefferson’s" and "All in the Family." The shop just wrapped up work for the most recent Tarantino film "Once Upon a Time in Hollywood," creating 18 different vintage wallpapers for the set design. Other projects have included work on films such as "Road to Perdition," "The Hunger Games," "The Da Vinci Code," and all the films in the "Oceans" franchise. 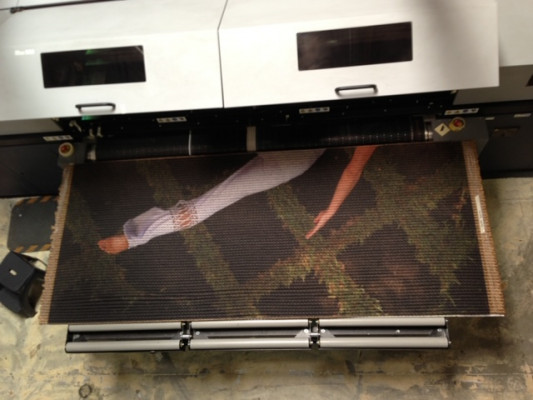 When a hotel in Colorado asked if Astek could print directly onto coarse rope, Aaron Kirsch, president, made it happen. 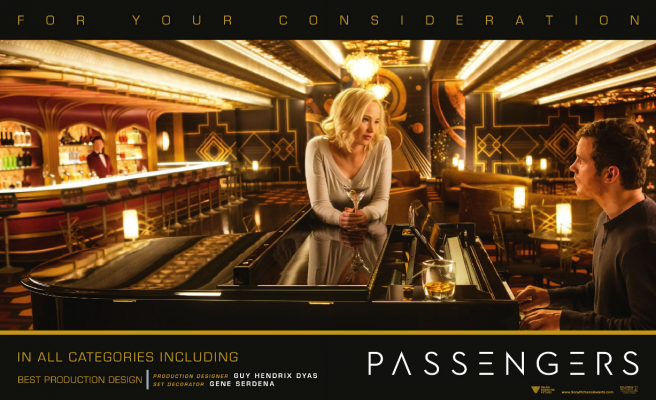 For the 2016 film "Passengers," Astek created the flooring and wall coverings for the set. 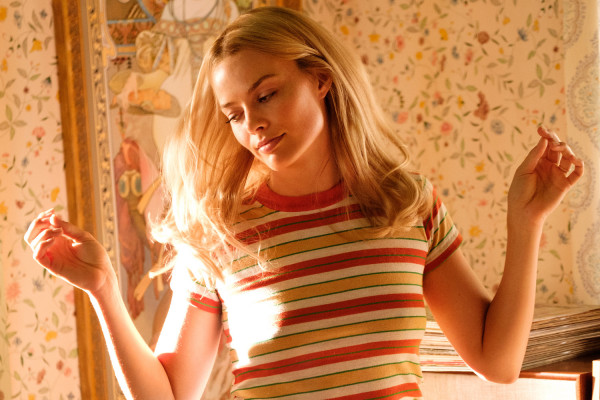 Star Margot Robbie in front of custom wallpaper created by Astek for Columbia Pictures' recent film “Once Upon a Time in Hollywood". 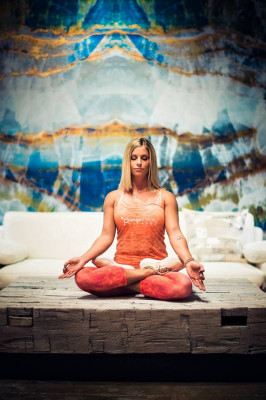 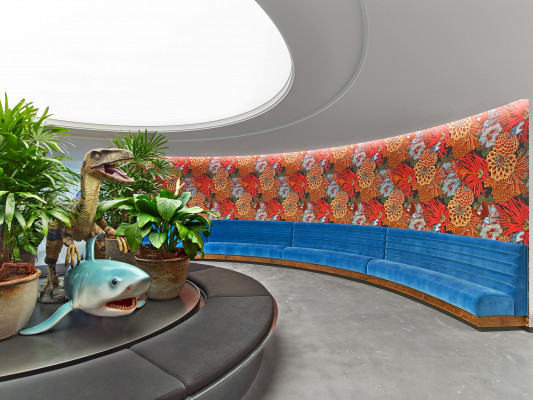 When Dropbox wanted to create an eye-catching entry at its headquarters, it called Astek. 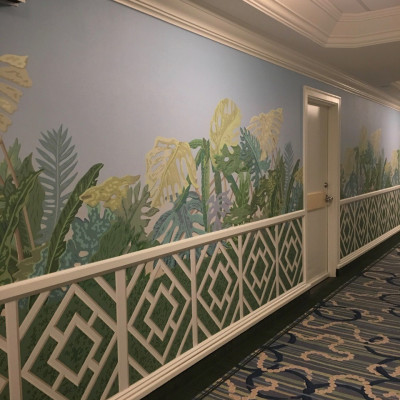 Astek recently completed work at the Breakers Palm Beach in Florida, as part of their renovation project. 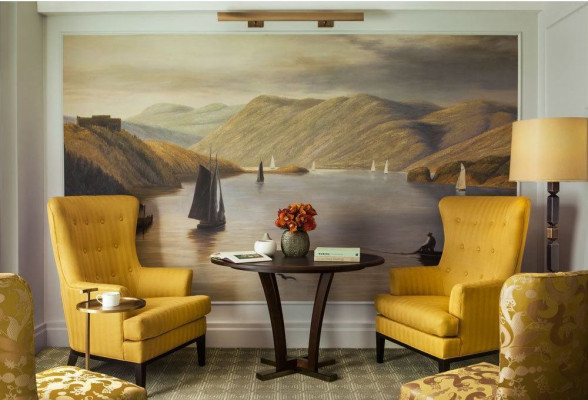 Astek created the wallpaper for the Barclay Intercontinental hotel in New York.

Beyond the work meant to go in front of a camera, Astek also does quite a bit of work in the hospitality and architectural spaces. “We designed everything for the recent remodel of the Beverly Hills Hilton, and we’ve done many of the hotels in Vegas,” Kirsch says. “We just did work on the Hard Rock Hotel in Tampa, Fla., and we finished the corridors and guest rooms for the Breakers Hotel in West Palm Beach recently.”

Kirsch notes that interior spaces is one of his biggest growth areas right now, especially with the shop’s suite of capabilities that allow it to take on any project, no matter how odd it might seem. “When someone asks us to do a project, if we think we have the ability, we’ll take it on,” Kirsch says. “I don’t say ‘no’ to anything. I say ‘let me see if I can do it.’ I drive my staff crazy.”

But the crazy results in some truly unique projects, such as the work done for a hotel in Colorado, that came to Kirsch and asked if he could print on strands of coarse rope. Astek ended up creating a jig, and was able to complete the unusual design. Another client, a high-end design firm, asked him once if he could print directly onto real gold and silver leaf. “It’s all fun,” says Kirsch.

Astek Wallcovering is a shining example of using the combined power of technology and creativity to generate success. Success that eventually led to a home improvement network and exposure on national television. “I didn’t even know when it was airing, but the next day I had more emails than I could have predicted,” Kirsch says. “The Brady project has been great PR.”

PR that will in turn lead to even more work, across even more industries, and is a great example for every print service provider out there — large or small — that there are no limits for those willing to color outside of the proverbial lines.

How Did COVID-19 Impact Catalogs?
END_OF_DOCUMENT_TOKEN_TO_BE_REPLACED