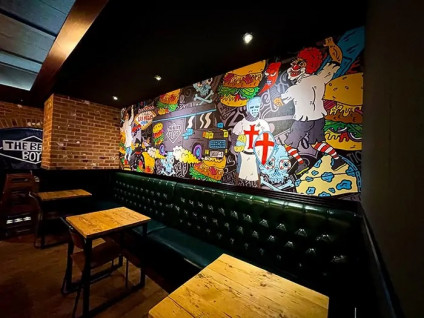 It started with a drunken barbecue that got seriously out of hand and involved four backyard amateur cooks with a shared passion for local produce and dirty, American Style burgers and BBQ.

Passion can be productive thing. It took the friends to Las Vegas where, in the World Food Championships, their Butty Bach Burger won the category final and propelled them to second overall.

The bad news is, if you want to sample The Beefy Boys’ amazing, peer-revered burgers and BBQ, you’ll have to travel. The good news is, it’s only as far as Hereford, and it’s more than worth the pilgrimage no matter what corner of the country you hail from.

Like any other species on the planet, we humans gravitate toward a good feed and it’s no surprise therefore that The Beefy Boys decided to get its wonderful burgers and BBQ in front of a wider audience. What started and an alcohol-fueled idea in a backyard, is also accessible to us all. Beefy Boys has a restaurant with an extensive but specialized menu.

Should you visit, you’ll find the ‘Boys’ story very creatively summarized in a very colorful mural that both informs and does much in terms of its contribution to the restaurant’s ambience. The Beefy Boys called in the experts from another part of town, Hereford based Signs and Labels, to produce and install the work of corporate art.

We don’t know if the Signs and Labels team got a feed out of the job but the result of their efforts is superb. The mural spans a substantial extent of the wall space available and depicts the sort of thing someone with big ideas for burgers may dream about. We won’t attempt to explain it, let’s leave that to the picture of Signs and Label’s excellent work.

The poppy, advertiser’s colors and general potency of the mural can be traced to the very expert print job that the Signs and Labels team delivered, and to the Metamark MD-WA Wall-Artmedia that they used. It’s another case of MD-Class media from Metamark doing its job well and the hands of real experts making the most of it.

Signs and Labels has got a very enthusiastic following of its own among the businesses in and around Hereford and much further afield. The company’s work encompasses the whole gamut of modern signs and graphics production and it’s particularly noted for its vehicle work.

We don’t support that The Beefy Boys or Signs and Labels would mind us sharing a menu so you’ll find it at thebeefyboys.com. Take a look, but not when you’re hungry.

How Did COVID-19 Impact Catalogs?
END_OF_DOCUMENT_TOKEN_TO_BE_REPLACED