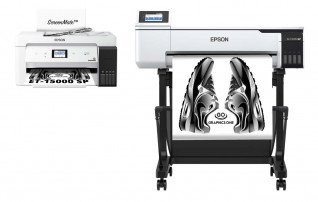 Graphics One is pleased to announce two new screen-printing packages for imaging film positives. Featuring GO ScreenMate Color Separation Ink and Film, the system includes either the T3170x or the ET-15000 along with the CADLink Technology Corporation’s FilmMaker RIP software making this a true turnkey offering.

According to Dan Barefoot, VP of Graphics One, “We decided to integrate full systems after many of our customers requested that we offer high end film positive capabilities with our color separation inks and microporous film. We were able to achieve this by employing the latest printer technology along with CADLink’s FilmMaker RIP software for both of our printing systems. Our new printing systems will establish a new standard for high quality film positives for the screen print industry.”

“We have been successfully selling our GO ScreenMate Ink and Film for many years. Manufactured by Prism Inks, amid the Silicon Valley in California, this ink has quickly become the standard for printing film positives for screens. Even more importantly, we were the first company to release a separation ink which takes full advantage of Micro Piezo TFP printhead technology,” added Barefoot.

The systems will be released in June, 2020 and will be available through the extensive Graphics One distribution network.

The PRINTING United Digital Experience will span three action-packed weeks beginning October 26 and running through November 12. Representing market segments throughout the industry, the Digital Experience will offer over 100 world-class educational sessions and more than 40 product launches for everyone across all job functions to access, at no cost.

Without a Second Stimulus, Expect Recovery to Slow
END_OF_DOCUMENT_TOKEN_TO_BE_REPLACED