Founded in 2000 by Commercial Director John Hardaker and his wife Janet Hardaker, and Production Director Paul Sharpe and his wife Colleen Sharpe, Graphicomm Digital moved from providing less lithographic work towards more digital wide-format graphics printing 13 years ago and, according to John, 'haven't looked back'.

"Signage is far and away the biggest part of our business," he says.

Over this time, Graphicomm Digital has done numerous projects for a family-owned amusement park in its home city of Plymouth. When the same family business was undertaking a major renovation of another of its attractions, the New York Thunderbowl bowling alley and entertainment complex in Kettering, it called the Graphicomm Digital team to discuss its interior graphics needs.

Working with the client, Graphicomm Digital's in-house graphic designer created an eye-catching wall graphic concept for the bowling alley: an underwater scene complete with coral and tropical fish, complementing images from the film franchise Pirates of the Caribbean. With such a large space to work with, Graphicomm Digital considered the material options for the job.

"We use vinyl every day so were more comfortable using vinyl again for the New York Thunderbowl project than, say, a wallpaper material," explains John Hardaker.

Antalis, a supplier of Drytac products, recommended Drytac's Polar Premium with a matte finish - a polymeric self-adhesive PVC film ideal for a range of applications including wall graphics, POS displays and general signage - plus a second Drytac product for laminate work.

The installation, which took place in early August, included applying the marine scene to two side walls measuring around 17m long, and across the front of the bowling alley area - a 21m-long space. In the cafe area Graphicomm Digital installed the biggest drop: a 5m-tall image of Pirates of the Caribbean character Captain Jack Sparrow. 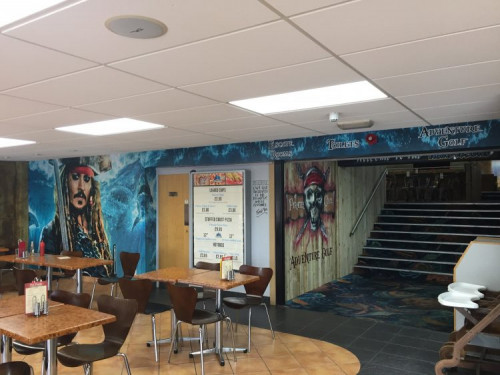 While Graphicomm Digital had used other Drytac products in the past, the bowling alley project was its first time using Drytac Polar.

"It's a great product," says John. "It prints well and is a lovely material to apply. The matte laminate finish looks and feels nice. We have already used Drytac Polar in two more projects as a result of the Thunderbowl job.

"This was a one-off, major overhaul of the entertainment complex so the graphics will be in place for a good many years."

How Did COVID-19 Impact Catalogs?
END_OF_DOCUMENT_TOKEN_TO_BE_REPLACED