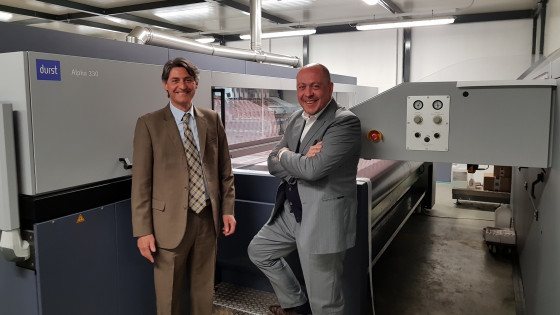 BRIXEN, Italy - July 11, 2018 - Durst, an inkjet pioneer and manufacturer of advanced digital production technologies, has helped Gabel Group to transform its retail business and open up more export trade in a partnership approach. A major household linen producer and retailer based in the heart of Italy’s textile area, Gabel has invested in Durst’s Alpha 330 super high-performance multi-pass printer with the One-Step Greentex P ink.

Gabel Group is achieving industrial scale digital production with its Durst Alpha 330 printer at its headquarters near Milan and is now looking to invest in a second system to meet the evolving customer requirements of ever-shorter print runs and specialist customization for its business as it continues to diversify and expand into new markets. 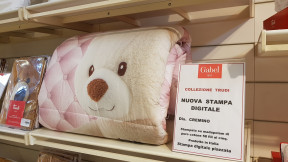 “The face of retail is changing,” said Michele Moltrasio, Chairman and President of Gabel Group. “Today many of the orders involve printing hundreds of metres instead of thousands of metres as in the past, but numbers of orders are going up hugely. Retail shops want different designs and colours every two to three weeks because they want to continue developing new ideas and new collections. As we continue to expand our export market, which we anticipate will double within a year to around 20% of our business, digital will become even more important because virtually every European country has different specifications for its linen requirements. The Durst Alpha 330 is a perfect fit for us.

“We chose Durst because it is the best possible supplier and best quality for digital,” said Mr Moltrasio. “It has been meeting and exceeding expectations and we are hoping to invest in a second Alpha Series system again soon. More and more applications are becoming possible with digital, which now makes up 10% of our turnover, but I expect that figure to rise to around 30% of our business within five years. We’re printed 400,000 metres in our first full year alone with the Durst, which, with the customization opportunities, has opened up new markets including for exports.”

How Did COVID-19 Impact Catalogs?
END_OF_DOCUMENT_TOKEN_TO_BE_REPLACED