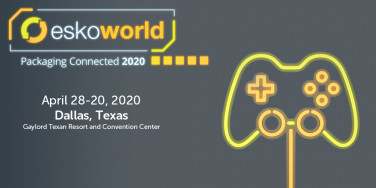 Esko, the global supplier of integrated hardware and software solutions to the labels, packaging and wide format sectors, has announced its EskoWorld 2020 platinum sponsor is Brain4Tools, a digital guidebook for printing tools.

EskoWorld, the three-day annual premier technology-focused event, is due to take place at the esteemed Gaylord Texan Resort in Dallas, Texas, between April 28-30, 2020. With over 500 attendees expected, EskoWorld is designed to showcase the latest innovations in printing and packaging technology, connecting businesses across the globe through its underlining theme ‘Packaging Connected’.

Melissa Plemen, Esko Director of Marketing North America, comments: “It’s a pleasure to welcome Brain4Tools back as our platinum sponsor at EskoWorld 2020 following such a successful partnership in 2019. The company’s focus on cloud and digitalization is key to our gaming theme this year, particularly as we move forward on our cloud based technologies at Esko.”

This year, EskoWorld is powering up its platform with an opportunity to get hands-on through educational workshops, breakout areas for cross-industry networking and over 130 presentations from Esko experts. There’s also a chance for attendees to unlock additional achievements by showing off their best poses in the Brain4Tools photobooth.

Brain4Tools CEO Robert Kohl will be speaking at the April event, and Askold Zimmermann, Business Devlopment at Brain4Tools, said the company was extremely excited to again be a part of EskoWorld. “Our focus is to drive digitalization in the print and packaging sector with our suite of management tools – and EskoWorld is a big part of helping us achieve that,” he said. “We’re looking forward to welcoming delegates to the event and are eager to understand the next generation technologies due to be unveiled this year, ahead of DRUPA 2020."

Five Things We Learned at ISA 2021

The Outlook for Print in 2021
END_OF_DOCUMENT_TOKEN_TO_BE_REPLACED