Empire Screen Printing Celebrated over a Decade of Partners 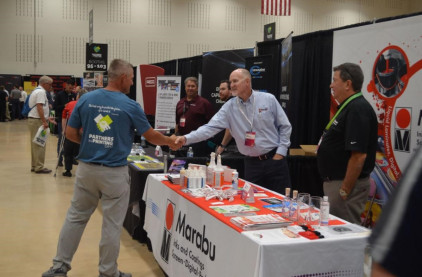 Originally organized in 2010 as a sales meeting for Empire Screen Printing’s representatives throughout the U.S. and Mexico to come together and tour the plant, the Partners in Printing Expo has grown to a major event in the printing industry every two years. As it has grown, it has shifted to include education about and for the entire printing industry, including Empire plant tours that are open to all within the industry, including competitors.

“The Partners in Printing Expo is designed to strengthen the printing industry as a whole so that all involved can benefit,” said Doug Billings, VP of Sales and Marketing at Empire Screen Printing. “From industrial to commercial printing, we all must work together to adapt to changing technology, improve sustainability, and learn from one another to keep the industry strong and relevant.”

The vendor fair included businesses and suppliers from throughout the printing industry and was focused on evolving technologies, sustainability, and strengthening small businesses through partnerships.

“The past year has been difficult for small businesses, and our industry is no different.” continues Billings, “the Partners in Printing Expo was one of the first major printing events of 2021, bringing people together to build partnerships, network, and collaborate to improve our industry is vital, especially during these times.”

“The contacts that we made at Partners in Printing proved to be extremely beneficial to our organization. We look forward to enhancing these relationships and plan to attend any events in the future.” - Bill Smith, National Sales Manager, Saati Americas

While many of the activities, like the speaker presentations, special networking event and Wisconsin Backyard BBQ were open to exhibitors or invited guests, the expo, concert, plant tours and golf tournament were open to the public.

The printing industry has a major impact on the community in the La Crosse area, employing a large number of local professionals in direct or indirect roles. The celebrity charity golf outing, hosted by Partners In Printing and 3M, raised over $6,000. to the La Crosse Children’s Museum in La Crosse, WI. “A considerable portion of our success is due to the commitment made by the golfers and celebrities who gave their time and donations, as well as those who purchased auction items. These contributions go a long way in fulfilling our mission of giving back to our community,” said Billings.

Closing out the event was the Tattoos and Tailgates Concert Series featuring rock, pop, and country acts. The event was emceed by Chris Kirkpatrick from *NSYNC, and included The Nashville Cartel, JuJu Rossi, Trailer Choir, Saliva, and Tyler Farr. For more information on the 2021 Partners in Printing Expo, visit https://www.empirescreen.com/partners_in_printing.html.

How Did COVID-19 Impact Catalogs?
END_OF_DOCUMENT_TOKEN_TO_BE_REPLACED