How a shop’s setup impacts workflow and profitability.

The hope behind an article on plant layout is that it will serve as a handy how-to guide — a simple set of instructions that eliminates chaos and introduces order. If wide-format production was about producing a hyper-focused, singular product, then plant layout would be easy: Set up the space, create standard operating procedures, and stick with it until the variables change enough to warrant action. But the wide-format segment is not a widget-making process. It is instead custom-focused work that requires any of a variety of technologies and materials between inception and delivery.

For wide-format, plant layout is a cluster of priorities and strategies: efficiency, flexibility, modularity, and room to change and grow. It also has a direct connection to the business’s profitability, and a wide-format producer’s ability to fully realize the value of its capital investments. Sharing their efforts and experiences with effective layouts are three wide-format producers: David Gerharter of Circle Graphics (San Fernando, California); Carla Johanns of Simpson Print (Bloomingdale, Ontario, Canada); and Ryan Westfall of Graphic Impressions (Hutchinson, Kansas). 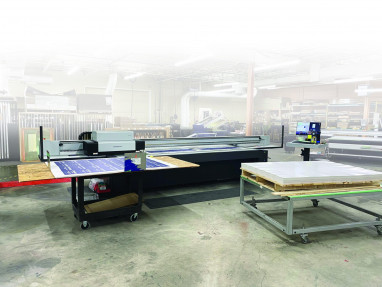 A modular worktable allows for adjustment of the workspace, adding a movable element amid much-less movable machines. | Credit: Simpson Print

In business for more than 50 years, Simpson Print’s primary focus is wide-format digital printing, though the company continues to do some screen printing — how the business started — as well as some offset printing and small-format digital. In addition to running three swissQprint Nyala machines, Simpson Print utilizes an array of finishing systems, including computerized numerical control (CNC) cutting, lamination, thermal cutting, and sewing. For its wide-format work, the focus is on specialized retail applications. This includes a substrate-savvy approach that falls outside of standard retail graphics. As Johanns describes it, “When others say they can’t do the job, then we can execute.”

At Graphic Impressions, 80% of the company’s work utilizes either wide-format digital or screen printing. The company is focused strongly on the fleet graphics market. For its digital production, the company has an EFI VUTEk GS2000 hybrid printer and a 5-meter-wide EFI VUTEk D5r printer. For finishing, Westfall says the company uses numerous CNC cutting systems from Graphtec and Zünd, as well as thermal die cutting.

At Circle Graphics, which started as a grand-format operation with a focus on billboards, the range of end products increased in 2015 with the acquisition of Imagic, a company focused primarily on the transit segment. This brought more pressure-sensitive and rigid substrates, and prompted the company to invest in a fleet of HP Latex printers, ranging with widths from 62 to 126". Gerharter reports the company’s finishing department includes a CNC cutter/router from MCT, cold lamination, a sheetfed UV coater, and multiple cutting stations. Today, the company’s product mix includes wraps for buildings, buses, trains, and trucks. Backlit displays are also commonly produced.

The strongest goal of plant layout strategies is the move toward achieving “flow,” which is the movement of a job from ordering, through production, finishing, and shipping, in a logical path. Speaking on the flow of product through his facility, Gerharter says the COVID-19 pandemic gave Circle Graphics a strong opportunity to address plant layout amid a move to a new building. With the entire operation on furlough during lockdown, Gerharter and a team of others were able to complete a move from the company’s three-building facility in Burbank, California, to a single facility in nearby San Fernando. “The new building was selected because it was ideal for workflow,” says Gerharter, who notes that the available space and equipment placement in the new facility allows for easy movement through the production process, and is as in-line as possible, given the variables of production. “The drive for a new building was a quest for better space.” 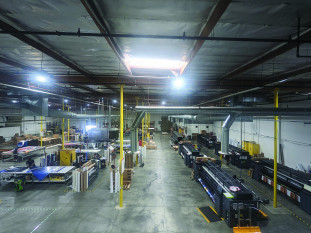 Thoughtful placement of equipment allows space around printers for maintenance and materials handling, and movement through the process. | Credit: Circle Graphics

The company’s old building was “crammed,” he adds, with each acquisition of a new printer resulting in a quest to find a place for it.

Westfall says that the process flow at Graphic Impressions is currently quite effective, though he noted that the company is growing, and has had to add both capacity and space to manage production and do it well. Westfall reports that adding 20,000 square feet to the facility was mostly about accommodating the company’s large EFI VUTEk press and its media, and to gain additional floor space. And, as full bus wraps have become increasingly common for the company, more — and larger — printed panels are produced, he says. Thus, more space is needed.

Johanns shares that Simpson Print’s facility has been a challenge, and that the company has removed walls to create an effective, circular workflow. She also reports that the addition of an in-house sheeter and Packsize on-demand packaging (for shipping) has tightened the company’s workflow. While plant layout can be viewed in purely physical terms — the movement of production from one machine to the next, from one station to another — Johanns adds that software and digital automation are also key factors for achieving flow. She says the consolidation of the company’s litho and wide-format operations through a single MIS system (Accura) allowed the company to move toward lean efficiency, same-day requests for quotes, and same-day PDFs.

Plant layout can be a key component to lean manufacturing and continuous improvement efforts, and is an essential consideration for any company looking to reduce waste of all kinds, tighten processes, and increase competitiveness. “You have to be in the business of continuous improvement with your team,” Johanns says, “because those savings can be passed on to the customer.”

Westfall says that his facility does not follow a formal lean approach, but notes that, “we improve internally and organically through constant evaluation to save materials, time, ink cost, and labor. With our experience, we take that knowledge and gather what we’ve accrued, then work to try to adapt it to a lean production philosophy.”

Gerharter, who has had substantial lean experience earlier in his career, says that thoughtful plant layout is one factor that has enabled Circle Graphics to reduce its defect rate from 2,200 parts per million to 805. Layout, and the space to work, he says, helped eliminate confusion surrounding some multipanel, multicomponent jobs.

For Johanns, changes in technology and printing markets have led Simpson Print to seek ways to gain needed floor space that could accommodate a new wide-format press and additional finishing. The company has removed two of its screen printing presses, including a six-color in-line unit. For Westfall and the team at Graphic Impressions, one of the greatest benefits to having both plant layout and production in check is that it has given the company a clear view of its options, and a stronger sense of how to grow the business. “Mostly,” he says, “it’s about evaluating whether we need to add more shifts, add more equipment, or review current layouts to see what will work best.” He reports that by constantly evaluating these three options, the company can make the best decisions.

For Gerharter, moving to a new facility that allowed for better process flow has been a strong benefit. He says Circle Graphics has seen an increase in employee productivity, part of which he attributes to a smoother, more integrated workflow. “Before we changed buildings,” he says, “so many things were in separate rooms. Now, that has been vastly minimized.”

The experiences of these individuals and their companies show that plant layout is not a “set it and forget it” activity. It is instead an aspect of a broader approach of self-evaluation: plan, do, check, act, repeat, repeat, repeat. With that concept in mind, what are these three companies looking to do in the near term? Westfall says his company has a continued need to evaluate floor space so they can continue to grow, noting that as labor efficiency is maximized, more equipment must be added, thus the need to add space. He maintains that labor efficiency is that gateway to growth, and that a high level of concentration on human resources and training is essential.

Gerharter has found that the needed addition of Circle Graphics’ 5-meter inkjet press presented a challenge because it strongly increased the need for vinyl welding, which was done only minimally before. “The vinyl welder,” he says, “doesn’t quite fit where it needs to be.” Meanwhile, Johanns indicates maximizing space is a current quest. She says that Simpson Print’s subsidiary business, Sawmill Display, has a showroom that “just isn’t needed anymore.” Her goal is to maximize wasted or under-utilized space.

Some Words of Advice

As companies grow and add capacity, Gelharter says, one key element is to think before doing. He shares from experience the value of defining which technologies must stay mostly stationary — due, for instance, to specific electrical connections or complicated venting systems — and those that can be moved easily. Fully modular elements, such as rollable/joinable worktables, can be easily moved or repurposed to fit the specific job. He adds that success-focused companies should prepare for growth, literally allowing empty space now, so that when capacity is added in the future, the disruptions of accommodating the new system are minimized.

When addressing what new or growing companies should know so they can expand gracefully and manage their plant layout logically, Westfall has a philosophical response. He says they should work to identify their identity: What they expect to do and where they hope to succeed. In so doing, he says, the company can establish priorities that can influence layout and workflow in an informed way.

According to John Compton, principal, Compton & Associates, and professor emeritus at Rochester Institute of Technology, one of the key differences in plant layout is between a process-based approach, and one that is based on flexibility. The process approach, he says, is traditional and focused on “old thinking.” It looks at an operation as a cluster of discreet departments, whereas the flexibility approach focuses on the value stream, with the ultimate goal of achieving flow. Flexibility, he says, also brings the ability to be nimble — a benefit for wide-format operations, where variety often abounds.

Compton says that most companies have to approach plant layout from one of two conditions. The first is a “blank slate” approach, as exemplified by Gelharter. Circle Graphics was able to inhabit its new facility with process in mind — a design-focused approach. The other condition is that of an existing plant, where companies must manage known quirks, space limitations, and floor plan challenges. These challenges are partially described by Johanns, with her experience of removing walls in her facility, and seeking to maximize wasted space by removing a showroom and retiring underutilized or unused equipment. Either way, Compton says, companies must build their plant layout on what they know, and always be prepared to evaluate and adjust. Finally, he adds that companies can benefit from efforts to reduce waste from their processes. One common type of waste is transportation, where materials or product are moved from one process step to another, perhaps wasting both space and time. “Printing operations are filled with hand trucks and other devices to move things around,” he says, implying that they are more of a symptom of inefficiency than a solution to a process challenge.

Based on these printing professionals’ first-hand accounts, it is apparent that plant layout is much more than just a puzzle to be solved, or a finite number of assets to be placed on a grid. Plant layout is instead a part of the broader quest toward continuous improvement, profitability, staffing versus capacity, and graceful company growth.

Setting Up a Wide-Format Printing Operation

How Did COVID-19 Impact Catalogs?
END_OF_DOCUMENT_TOKEN_TO_BE_REPLACED