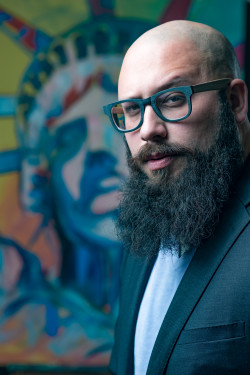 At PRINTING United this year, one special guest in attendance is Joe Everson, an artist and performer known around the world for his talent at painting and singing. Celebrities, corporations, sports teams, and more are all found on his client list — and now the attendees of PRINTING United will be among them as well.

Known as the Singing Painter, Everson creates works of art painted upside down — the subject not revealed until the end when he turns it around — while singing a related song, such as a jingle or the national anthem, which is his most popular request. While he is usually booked for corporate events, or at large sporting venues, at PRINTING United attendees will have two chances to see him in action.

The first will be on the show floor in the Hall C Lobby area, across from Ballroom C, where everyone is invited to see Everson produce one of his more famous combinations, painting his version of “Raising of the Flag on Iwo Jima” while singing the national anthem. The second opportunity will be at the dinner event at Gilley’s Dallas on Wednesday from 7 - 9 p.m., where he will paint “Lady Liberty” while singing “God Bless the USA.”

In addition to getting to see Everson live and in action, instead of just watching him on YouTube, vendors across the show floor have been given the file of his “Lady Liberty” print, and will be producing it on their own equipment. It is a rare opportunity for attendees to see the same file, prepared the same way, produced on the full range of technologies, on a diverse selection of substrates, and with every conceivable finishing option.

Everson will also be hosting a meet-and-greet in the Hall C Lobby area, across from Ballroom C. This is a free event for show attendees, where he will answer questions and sign anything attendees bring — including those samples produced by the PRINTING United vendors.

Everson’s big break came several years ago, when he decided to combine his love of art with his singing voice, and booked a performance in Toledo, Ohio, before a hockey game. His manager, Daniel Lyles, had sent out a press release ahead of time to local news media, which captured both the unique performance and the crowd going wild. Video was posted online, and it went viral, garnering more than 35,000 retweets in the first 30 minutes alone.

An executive at Fox News saw the video, and Lyles notes that Everson was booked and re-routed to appear on the Fox & Friends television show the following morning at 7 a.m. By 8 a.m. he had sold everything from his website, his schedule began to fill, and the rest, as they say, is history. Since then, 13 of Everson’s videos showing him painting and singing a wide range of styles and songs have gone viral as well, with more than 220 million combined views to date.

This is a rare opportunity to not only see Everson’s talent in action, but to also meet him and obtain a signed print that no attendee of PRINTING United will want to miss.

#RyansRemarks: What Does PIVOT Mean?

#RyansRemarks 55: Your Brand is the Difference
Comments
COVID-19 Resource Channel