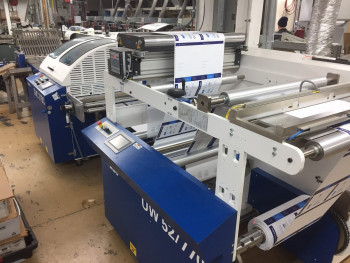 When Design Distributers needed to upgrade its finishing equipment, it decided on an MBO device that was able to replace three of its older finishing lines.

Design Distributors, a commercial print and mail house in Deer Park, N.Y., was formed as a small envelope shop in 1966 by David and Stuart Avrick. Today, with Stuart’s son Adam at the helm, it employs 125 people, fills 130,000 sqft, and pumps out more than 100 million pieces per year.

In November 2018, Design Distributors made its next major leap forward. It purchased an HP (Booths 6407, 6416) T240 Digital Inkjet Web Press, which enables it to provide the highest quality at production speeds of 500 fpm in performance mode, and 250 fpm in quality mode.

At Design Distributors, it would be safe to say that installing high-speed inkjet has changed everything — and that includes the production floor. Even in 70,000 sqft of production space, adding a new press was a challenge in a facility already packed to the gills with equipment and people.

But it wasn’t just the press and paper the shop had to make room for. With the HP running at speeds of up to 500 fpm, Design Distributors needed to upgrade its finishing to keep up. “The existing finishing lines just weren’t fast enough,” Mike Glanzman, VP of operations for Design Distributors, notes. “We had to have the absolute fastest finishing equipment available. That meant MBO (Booth 9951).”

In July 2018, Design Distributors installed its new high-speed web fed MBO finishing line. The line included an unwinder, sheeter, two buckle folders, and delivery all capable of running single or multiple up products. “It was a huge investment,” Glanzman says, “but the ROI has been incredible.”

In part, this is because the MBO line was able to replace three of the older finishing lines. Before, it was running eight lines of Bowe and Spedo cutters, going into MBO and Stahl folders. Three of these lines were replaced with one MBO line. “With the MBO equipment, we were able to do a 3:1 replacement,” Glanzman says. “That’s an exponential reduction.”

Labor was reduced, too. Each older line was run by a single operator; the new high-speed line pushes out three times the volume, but requires two operators. “This gave us 3:2 labor reduction,” he adds.

The new line also facilitates higher volumes by increasing format flexibility. It fits 30" rolls, which offers significant capacity increases over its older lines, which were limited to 18". 7

Design Distributors’ heavy investment in its production and finishing capabilities clearly has hard productivity benefits. However, there are soft benefits as well.

With so many printing companies cutting back or going out of business, the decision to make such a significant capital investment in production and finishing sends a strong message to both the employees at the company, and to the larger marketplace.

With so many new cost-effective options, clients can broaden the number of formats they use for their mailings. This gives them the freedom to test new approaches and drive even better results.

Although Design Distributors’ clients are hesitant to share their metrics, the company is hearing anecdotally that the added flexibility is increasing response and conversion rates as well. In the previous workflow, the finishing line could handle sizes no larger than 18" wide. The new line can handle up to 30". “In the old workflow, for every 11" inches, I could cut and fold two forms across,” Glanzman explains. “Now, I can do three across. That’s a 50% increase in throughput.” 8

The Next Opportunities in Print

The Outlook for Print in 2021
END_OF_DOCUMENT_TOKEN_TO_BE_REPLACED