With everything from UV printers with in-line cutting to heat-assist laminators, Mimaki USA (Both 1231) has a well-equipped booth at this year’s expo. At its press conference on Tuesday, the company detailed some of the innovations it has brought to New Orleans. 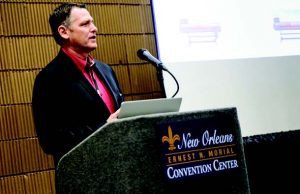 At the Mimaki USA (Both 1231) press
conference on Tuesday, Ken VanHorn,
VP of Marketing and Operations, detailed
some of the innovations Mimaki
has brought to New Orleans.

Chief among them is Mimaki’s UCJV Series of UV-LED cut-andprint devices, an innovation that Ken VanHorn, VP of Marketing and Operations, called “something extremely exciting for us.” The 64-inch UV printers feature White ink to enable four-layer printing, which allows designers to build layered graphics for backlit applications, he said.

Also new are the LA-160W and LA-170W laminators, running at up to 295 inches per minute. This new heat-assisted platform improves overlaminate film adhesion and reduces the potential for the silvering effect created by pressure-sensitive overlaminates. The 62.2-inch LA- 160W is on display at the show.

We’ve completely redesigned the control panel on this machine,” he added, to make it more intuitive and easy to use.

Though its newly released 3D printer, the 3DUJ-553, is not at the show, Mimaki is showing off samples at the booth. “This is really the first photo-realistic 3D printer on the market today,” said Hope.

Bob has served as editor of In-plant Impressions since October of 1994. Prior to that he served for three years as managing editor of Printing Impressions, a commercial printing publication. Mr. Neubauer is very active in the U.S. in-plant industry. He attends all the major in-plant conferences and has visited nearly 170 in-plant operations around the world. He has given presentations to numerous in-plant groups in the U.S., Canada and Australia, including the Association of College and University Printers and the In-plant Printing and Mailing Association. He also coordinates the annual In-Print contest, cosponsored by IPMA and In-plant Impressions.

The Outlook for Print in 2021
END_OF_DOCUMENT_TOKEN_TO_BE_REPLACED