JOPLIN, Mo. – August 24, 2018 — CFI, a leading North American full-truckload carrier and subsidiary of TFI International Inc., unveiled five custom-designed, large-format “truck wraps” recognizing the company’s military veteran and women drivers for their service to CFI and its customers, and to encourage more military veterans and women to consider truck driving as a profession.

CFI is rolling out four tractor/trailer units with new “True to the Troops” commemorative graphics, joining two existing military-themed trucks. Also new to the fleet is a special unit displaying a “She Drives CFI” truck wrap, which honors four of CFI’s longest-tenured women drivers. Out of CFI’s 2,000 driver workforce, fourteen percent are women while more than sixteen percent are U.S. military veterans. 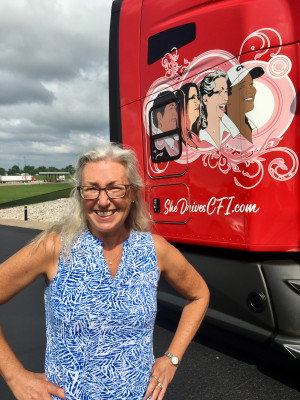 “The women honored with this special truck are a positive example for all drivers,” says Greg Orr, president of CFI. “We want to encourage more women to enter the profession. By recognizing these pioneers, their perseverance and their trail-blazing leadership, we’re honoring the past, present and future. These professionals are real-life examples of successful women who are making a difference and proving every day through their exceptional service they are as capable as anyone in our industry.”

Orr adds that the military-themed commemorative wraps accomplish an equally important objective – recognizing its military veteran employees, for their service to the country, and the values of safety, reliability, and superior service they demonstrate as professional CFI drivers.

Cakes and PVC: What Do They Have in Common?