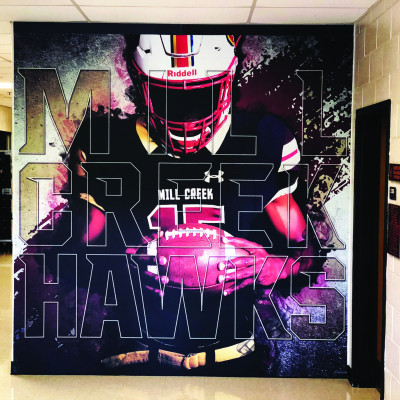 Jody Spain, co-founder of Cotton Eye Joe’s, explains that high schools and colleges want to communicate who they are through sports graphics, such as the one seen here.

Here’s what major players in this market have learned:

Suttle-Straus of Waunakee, Wis., serves the university market with an experienced design team, a bank of flatbed and roll-to-roll printers and a variety of finishing equipment.

“The majority of the work we do is for spaces that are not viewable by the public,” says Eddie Mason, the company’s art director. “We design and print for locker rooms and hallway connectors where the public doesn’t go. The purpose of these displays is recruiting. They bring in a recruit, and they want to knock their socks off.”

Headquartered in St. Paul, Minn., The Vomela Companies operates out of 23 locations in the U.S. and Canada, designing and producing wide-format graphics using an extensive lineup of roll-to-roll and UV flatbed printers, as well as sheetfed, screen and digital print platforms.

The university market, says Mary McCahey, the company’s VP of sales and corporate marketing, operates on its own timetable.

“The timing of work with universities is not a flat line across the calendar,” she says. “There are spikes in the summer months because they want all of their work done when school is not in session.”

As to what high schools and colleges look to achieve with their sports graphics, Jody Spain, co-founder of Gainesville, Ga.-based Cotton Eyed Joe’s, notes that they want to make a statement — and they want to communicate who they are.

“We’ll use multimedia and multi-dimensional elements to do a project,” he says. “We might create a wall wrap and then hang an acrylic sign to accent the wrap. And if a client doesn’t have it, we provide a branding package for them. A style sheet for a college team would have their logos, fonts and Pantone colors, for example. If their mascot is a knight and the stadium is called the Dungeon, the Dungeon will have its own logo as well – and it will all be in theme.”

“With us, they are not trying to do something that is way over the top — they get the wow factor with the glass and the color,” he says. “We do CMYK — and we can do white — so we can get a two-sided image that is the same on both the front and back.” Many glass graphics, he adds, are accented with etchings and other textures produced by Moon Shadow Glass’ CNC and sandblasting machines.

“Using neutral tones accents any school colors and is an elegant way to accent a display,” he says. “Video wall installations are also popular. Showing photo after photo of people who may have been stars at the university several years ago has no relevance to a recruit.”

He adds that accent lighting, and specifically LED lighting, is also in high demand. “We do some of the more straight-forward applications, such as adhesive-backed strips of LED lights, and we use vendors to build UL [Underwriter’s Laboratories] approved signage. We are not lighted sign builders, but we have vendors we use for this.”

“Walk around any college campus and 95% of the students are on their phones, looking down,” she says. “Sidewalk graphics — anything at foot level is prime real estate now.”

“You have these young kids, and then you have their grandmas and grandpas, and it has to appeal to everyone,” she says. “I have a daughter in high school, so I use some of my inner child to ask if my daughter would think it’s cool.” 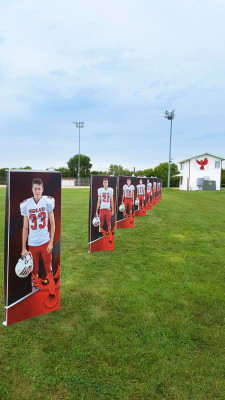 Sports graphics can be used to excite and encourage school spirit.

While opportunities for PSPs abound on campuses, getting school personnel to understand what is feasible and within their budgets can be a challenge.

“We find that when working with the universities and even some of the smaller high schools, it is challenging to get them to understand what can be achieved,” Iverson says. “They understand the basics, and sometimes they have a vision, but they don’t understand the process of what is involved.”

“The high schools really do have tight budgets,” Marquardt says. “We try to get them to understand that there is a significant cost to this work up front, but it will pay off over time.”

McCahey adds, “Because we are not dealing with professional buyers or even people that are familiar with how to care for graphics, we need to make sure they have to the proper information on how to clean the floor without eating away the laminate or peeling it up. In this market, you are dealing with people who have another job — this is all done on the side.”

According to Mason, the most challenging part of university applications is often the complexity of the installation.

“You can do this work with printers ranging from $10,000 to upwards of $1 million, but the toughest part is the install,” he says. “Putting vinyl letters on a wall is much easier than working with three or four products of varying install techniques. And not many PSPs are accustomed to acquiring the service of getting a lift that will get you 40 feet in the air and extend over the seats.”

And when a university authorizes a complete branding campaign, McCahey says the PSP must be equipped to produce all their graphics.

“We recently completed a rebranding project for a university in Northern Minnesota,” she says. “We did a fair amount of interior work on common walls and flag pole banners that are interchangeable to welcome students, and for events like homecoming and parents’ weekend. The project also included all-new floor graphics for the basketball arena and outdoor wayfinding signage for the school’s athletic facilities.

“They were looking to really brand their campus in a way that was more engaging to prospective students and the community. There’s so much pride in the brand of a college — especially where sports are concerned,” she continues.

When tasked with transforming university venues, says Mason, a PSP needs to be part engineer, and part designer. “You have to be able to envision as you develop a concept how it is going to look dimensionally and what components have to be created,” he says.

Beyond that, he adds, a PSP needs to be able to assess the viability of what the client wants to display. “We are working with concrete block walls, poured concrete walls and drywall — and all have their own unique install methods,” he says. “Understanding the wall surface is a big part of executing on these graphics. And you have to work around the obstacles — in a literal fashion. Light switches and fire alarms — you have to account for them. If there is a strobe on the wall where you want to install, that is a costly problem.” 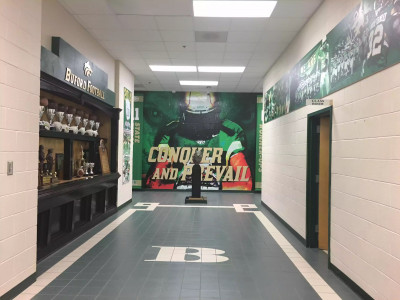 Creating a wall wrap and adding signs
to accent the wrap are a great way to
increase the wow factor of sports graphics.

And the graphics at universities, notes Iverson, keep getting larger. “We did a job for the University of Michigan, for the glass front of a building, and the panels were 78˝ wide by 14-ft. tall,” he says. “Often clients prefer to do it all in one sheet, but that one we had to do with panels. We use cranes with suction cups to pick up very large pieces of glass.”

While universities tend to invest more in their sports teams and related graphics, with the right approach high schools can be persuaded that updating their look is worth the cost, despite limited budgets. “My personal background is that I was a high school teacher and coach,” Spain says. “I didn’t like the way the high school looked. The apparel, signage and venues were all different. There was a different mascot per sport. Our business brings consistent professional branding down to the high school level.”

Recently, Cotton Eyed Joe’s revitalized a local school gym with all new wall graphics. “They had 100 championship banners and they were old, so they wanted to take all of them down, and we went in with a PVC-wall-mounted graphic for each year,” he says. “It is impressive. It looks like a legacy, and that is what we wanted.” 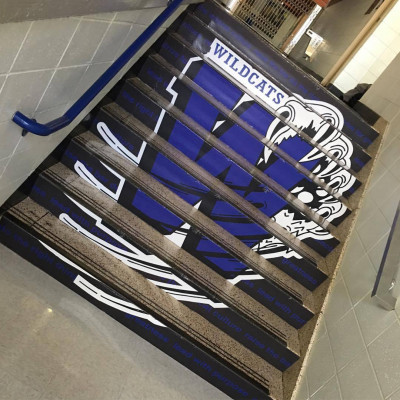 To give high school sports teams the end-to-end makeover they envision, Spain advises his clients to implement new graphics in stages.

“While most high schools don’t have the funding for everything they would like to change in one year, what we will do is go in and say, ‘stick with us — in phase one we’ll do this, and phase two, three and four will match phase one.’”

According to Marquardt, educational red tape and regulations require PSPs to be patient. “The approvals can be lengthy, and there are issues such as whether or not graphics meet the fire code,” she says. “We have to supply them with the spec sheets of the media, for example. For one project, it was 10 months from the time I started to talk to them to the time we actually put something up on the walls.”

But the results in this market, she adds, are well worth the wait.

“When we wrapped our first high school wall, in a weight room, the football team was practicing and some of them came in to lift weights,” she says. “It was so cool because they were saying ‘this is awesome,’ and to see the excitement of the kids was really great — you don’t always get to see that in this business.”

She continues, “These graphics are very important to the people there. They really help improve student life and school spirit.”

Why Printers Should Care About Repeats

How Did COVID-19 Impact Catalogs?
END_OF_DOCUMENT_TOKEN_TO_BE_REPLACED