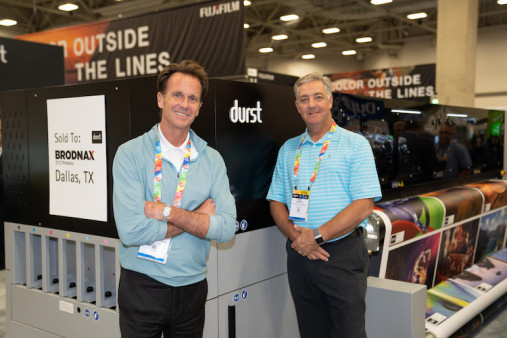 Sealing the purchase of a Durst P5 series large-format printer by Broadnax 21C Printers at PRINTING United were, from left, Broadnax’s Jim Singer and Mike Campbell.

Jim Singer and partner Mike Campbell have been steadily molding the company they bought in 2002 into “what a 21st-century marketing services provider should be,” said Singer. The company’s name since 2016, Brodnax 21C Printers, reflects the many steps that they’ve taken in that direction. As does their purchase of a P5 series large-format inkjet printer from Durst Imaging Technology US, announced at PRINTING United.

The company, in operation in Dallas, Texas, since 1957, is a commercial printer that divides its business among high-definition lithography, data-driven imaging, large-format output, and promotional products. According to Singer, the rapid growth of the large-format segment called for the addition of a 3m-wide device in the form of the hybrid Durst P5, which will join a 3m flatbed and a pair of 1m flatbeds in that department.

Singer and Campbell expect to install the new device the week after PRINTING United closes and to have it in full operation the week after that. They say they’ll use it to print a broad assortment of wide-format applications on rigid and flexible substrates, vinyl, window cling, and other substrates.

The Outlook for Print in 2021
END_OF_DOCUMENT_TOKEN_TO_BE_REPLACED