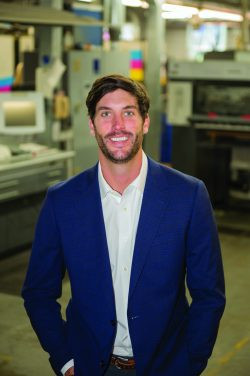 Andrew Smith VP of sales for the Kennickell Group

If there is one thing that Andrew Smith says he has learned during his time with Savannah, Georgia-based commercial and wide-format printer Kennickell Group, is that there is “something to be said about picking up the phone and calling people.” Smith explains that although some of his friends and colleagues might send emails rather than making calls, he has landed more business by talking with people face-to-face or on the phone than in any other way. This philosophy for fostering personal relationships with clients has driven the 28-year-old to success and was beneficial over the past year and a half.

Having joined Kennickell three years ago as a sales associate, he had already started forming relationships with clients when the pandemic hit in 2020. The solid foundations that he built helped continue his burgeoning success with the company.

“You’re talking about a yearlong pandemic, it can certainly stress those relationships,” he says. “I think the way that I made it through COVID with a lot of my customers still intact is because upfront we did have those personal relationships.”

Although Smith admits there were difficulties throughout the pandemic, he has had some personal successes in his years since joining Kennickell. When he started with the company as a sales associate — new to the printing industry with an education in business administration and art — he describes himself as a “young hungry sales rep” that launched into the world of wide-format printing.

“I sunk my teeth into printing with vehicle wraps and wall murals and building murals,” he explains. “I could use a little bit more of my artistic background to kind of help customers decide on different designs and things like that.”

One of Smith’s biggest challenges has been proving his understanding of printing.

“When I had first started out,” he says, “certainly there were difficulties with talking the lingo with somebody [who] had been in the printing industry for 30 years. … Printing is essentially custom manufacturing. So, if somebody doesn’t think that they can trust you, there’s just no shot you’re going to get in any of that work. It took me a solid six months to a year to have enough background to be able to fire a couple of bullets.”

As he progressed, moving from a sales associate to a sales executive, he gained confidence speaking with companies about the more conventional side of printing, in addition to wide-format printing. Most recently, in true “rising star” fashion, Smith was promoted this year to his current role of VP of sales.

“I think [what] I’ve learned since stepping into [this] role is just to be able to look at things from a little bit of a higher level,” he says. “I get a chance to make some decisions that I might not have been able to make by just being a sales rep.”

Making decisions is now what Smith sees as one of his biggest challenges. He’s been approached by the CEO to begin thinking about the future; exploring what makes the most sense for the company to keep it “ahead of the curve,” including new equipment and potential new applications.

“The challenge right now is positioning our company and making decisions for our company that keep us going for a while,” he says.

For a company with a history dating back to 1892, “a while” could mean another 128 years, according to Smith.

“My long-term goal is to just be in a position that I’m helping make decisions that continue to keep our company in business for another 128 years,” he explains.

As for where Smith plans to be in the next 10 to 15 years, he wants to continue with Kennickell with a goal of selling $2.5 to $3 million per year in print.

“Our company, we’ve set it up to be sales driven, not production-driven,” he says. “And that is a perfect model because the sales rep ultimately gets the final say. And obviously, we all have a vested interest to get the product out to our customers. So that has really helped our company as well, too.”

Although Smith’s goals for the next 10 to 15 years are focused on Kennickell, he does have some recommendations for the future of the industry in the years to come. He notes the need for conversations about the negative perception surrounding printed products, waste, and sustainability.

“I think that anybody that got into this industry would see that print is really needed to continue to engage people,” he says. “I mean, there’s only so much you can do through a computer screen or a TV screen. At some point, things have to be held in your hand.”

Finally, Smith points to the need to bring more young people into the industry, starting with education about printing at a younger age.

“I would just love to see some younger folks get into the printing industry and that kind of become a little more popular in higher education,” he concludes. “I think it’s something that really a lot of kids are overlooking.”

How Did COVID-19 Impact Catalogs?
END_OF_DOCUMENT_TOKEN_TO_BE_REPLACED