A Different Kind of Printer 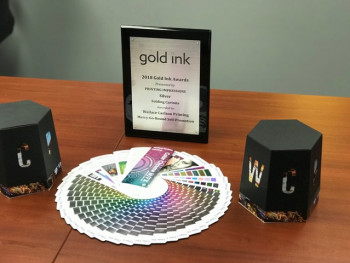 Wallace Carlson Printing, in suburban Minneapolis, Minn., opened for business in 1931. In 2003, the company was acquired by Ann and Brian Turbeville, who were joined in 2010 by a third partner, Charlie Cox, a career print operations professional who serves as COO.

By 2015, the company exhibited good growth and profits, but the Turbevilles and Cox became concerned, sensing that despite their best efforts, their business looked very much like that of their three or four major competitors in the area. Thus began a Wallace Carlson Printing turnaround — an effort to differentiate the business in the marketplace. Cox believed that the key to differentiation lay in equipment capability, and began a search of hardware and software for something that would demonstrate Wallace Carlson Printing was indeed a different kind of printer.

Their research led them to conclude that specializing in UV printing would not only allow Wallace Carlson Printing to demonstrate a marketplace difference, but would yield operational efficiency gains sufficient to justify a major equipment investment. They settled on the Komori Lithrone GL840P H-UV press, and the Komori-endorsed Toyo Kaleido expanded gamut inkset as the foundation of their turnaround effort. The success of the relationship prompted Cox and the Turbevilles to partner more closely with other suppliers as well, standardizing production processes, simplifying purchasing, and making employee training more productive. Today, the company enjoys equipment partnerships with Fujifilm (Booth 8220), Esko (Booth 5404), Brausse, and MBO (Booth 9951).

Their differentiation strategy led the company to market the Color-Logic process as Color Chrome M/FX, and back up the capability with in-house graphic designers and ready support for agencies and independent designers anxious to use metallics in designs. The proprietary swatchbook Wallace Carlson Printing uses to promote the process even won a silver award in the 2018 Printing Impressions Gold Ink Awards competition. Available in several versions, using different substrates and ink combinations, the metallic swatchbook has greatly enhanced the company’s reputation among packaging customers, in particular. Cox says, “The magentas and yellows produced by the Color-Logic process are especially strong, and print buyers are impressed by our ability to execute metallic effects consistently throughout a press run.”

Technology demonstrations are at the core of the recent Wallace Carlson Printing renaissance, which have led to several of the company’s projects to be showcased on Fold Factory and Color-Logic videos detailing how printers can produce exciting direct mail pieces and packaging using conventional equipment.