60 OBIE Awards Presented for Exceptional Design, Creativity in Out of Home Advertising 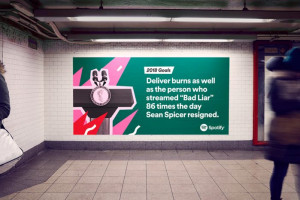 Spotify received the Platinum OBIE Award, which recognizes the best OOH campaign of the year, for its in-house “2018 Goals” campaign. After a difficult year that may have left people wanting to tune out, Spotify wanted to encourage music fans to keep listening. The music streaming service found fun facts in its data to create optimism for the year to come by turning 2017 listening behaviors into 2018 goals.

“Spotify took actual playlists and incorporated them into the OOH advertising,” says Michael Anderson, creative director at McGarrah Jesse and 2018 OBIE judge. “It’s the perfect international campaign for what many would say is the international language – music.”

Angeline Toh, art director at Spotify, says, “The reason the campaign resonates so well with people is because we’re actually using their listening habits and telling it back to them as stories.”

“The idea of being a part of a community of millions of listeners around the world who are all listening to music together… there’s a lot of fun in that,” adds Dan Brill, associate creative director at Spotify.

In addition to the Platinum, Gold, and Craft awards, OAAA awarded 15 Silver OBIEs and 33 Bronze OBIEs.

Iconic brand MillerCoors was honored with the 2018 OBIE Hall of Fame Award, recognizing the brand’s consistent excellence in OOH advertising design over many decades.

Be The Best at What You Do

The Outlook for Print in 2021
END_OF_DOCUMENT_TOKEN_TO_BE_REPLACED